Anderson Silva refuses to believe that he is unbeatable, preposterous

Normally I associate Jack Daniels with liquor but today I met a mechanic also named Jack Daniels. So now when people say ‘Hey Zeus, want some Jack Daniels and Coke’ I have to think, well maybe they are referring to that mechanic that I met. In that case, ‘No, I don’t need my car fixed, but I will take soda’. I’m pretty sure Ando doesn’t drink rum, he’s took busy dodging tennis balls and building a shack in his backyard for the UFC middleweight belt (because it’s going nowhere). However, Anderson Silva is incredibly humble or in extreme denial in this brief chat session with Brazilian fans on Twitcam (via FightersOnly).

“Surely I am not unbeatable. Sometimes, we go through situations that demonstrate it. We train hard to do a good job but at any moment I can lose. What lasts is what we built as a legacy – what we already did will be in history. This thing of ‘unbeatable’ is something too vague”

“Perhaps I’m the next victim. The next fight [for me] is scheduled with Okami in August and let’s go there, UFC Rio. There are still so many things I would have to do before I could be called a ‘living legend.’ “

Georges St. Pierre vs. Anderson Silva came in 9th on our list of The Top Ten Fights We Want To See Before 2012 Blows Up The Earth Or Something. We got a lot of crap for it because fights like ‘Seth Petruzelli vs. Kimbo Slice’ ranked higher but come on people, how angry can you get at a hypothetical list that factors in the world coming to an end in the next two years? We’re not sure if that fight will ever take place, but judging from Anderson Silva’s vast body of work, one can only imagine who would come out on top. [Source]

If the UFC had Mortal Kombat style fatalities, Nik Lentz would be like Jeffrey Dahmer
← Read Last Post 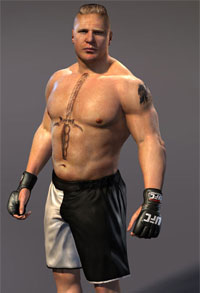 Want to test the next UFC Undisputed? Here’s your chance
Read Next Post →
Click here to cancel reply.