Alistair Overeem overcame some early adversity to finish Augusto Sakai in the 5th and final round.

Up next in the main event of the evening, the heavyweights take the stage. Former Pride and Dream Champion Alistair Overeem (46-18-1NC) is one of the most decorated heavyweight fighters of all time. He plans on making another run for the UFC heavyweight championship, but the promising Augusto Sakai (15-1-1) looks to disrupts his plans.

Both fighters come out orthodox and Overeem takes the center of the octagon. Overeem blitzes into Sakai but he misses with the combination. Sakai lands to the body after missing with a right hand. Sakai lands a body kick and rushes Overeem. He lands a knee but Overeem counters with a knee of his own. Right overhand lands in the clinch for Sakai. Overeem breaks free from the clinch. Sakai lands jab and circles along the fence. Overhand right lands for Overeem. Sakai switches stances often to confuse Overeem. Uppercut lands for Sakai who then evades the punches from Overeem. Sakai lands a combination and gets away from Overeem. Sakai Misses with a right hand as the round ends.

Both fighters exchange kicks right at the start of the round. Overeem eats a body shot from Sakai. Sakai lands a knee and a one-two combination. Overeem lands a knee of his own. Nice high kick from Sakai, Overeem lands a body shot and a knee in the clinch. Sakai intercepts Overeem and lands a combination. Both fighters battle in the clinch and land body shots. Sakai and Overeem exchange knees and Overeem follows it up with a left hand. Sakai lands two elbows and breaks away from the clinch. Sakai lands a few leg kicks. Sakai blitzes, lands a right hand, and ends the round in a clinch.

Overeem lands a nice outside leg kick but the next one gets checked. Intercepting uppercut lands for Sakai. Nice combination ended with a low kick from Sakai. Nice uppercut lands for Sakai yet again. Sakai lands a combination and ends up in a clinch. Switch kick lands for Overeem. Overeem continues to kick and Sakai retaliates. Overeem gets a nice takedown along the fence. Overeem lands some ground and pound, Sakai lands a nice upkick. Hammer fist lands for Overeem. Overeem lands a few big shots on the ground, he improves to side control as the round ends.

Overeem lands a right hand and Sakai lands to the body. Outside leg kick lands for Overeem, Sakai lands a combination and a knee along the fence. Big right hand misses for Overeem. Sakai lands another combination punctuated by an elbow. Sakai opens up a cut on Overeem with a nice elbow. The action is stopped after a spinning kick from Overeem hits Sakai in the groin area. Sakai lands two leg kicks but Overeem takes him down right after. Overeem lands some big punches on the ground. Big elbow lands for Overeem, he has the back position but Sakai rotates. Overeem maintains the top position and lands some devastating elbows. Overeem is on top as the round ends.

The fighters touch gloves and Overeem gets a takedown immediately. Overeem lands some big punches and Herb Dean has no choice but to stop the fight!

Official Results: Alistair Overeem defeats Augusto Sakai by way of TKO at 26s of the fifth round.

Listen to these @AlistairOvereem GnP shots 🔊

🎙 Step into the corner of Augusto Sakai after RD 4. #UFCVegas pic.twitter.com/72oIBUWkvc

FOUR DECADES IN THE GAME.@AlistairOvereem isn't afraid of some deep water 🌊 #UFCVegas9 pic.twitter.com/Nk0uRnqKsm 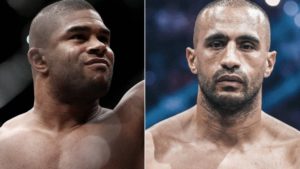 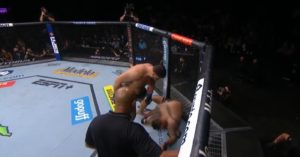