A discount store wants to buy DREAM, and it looks like it may happen 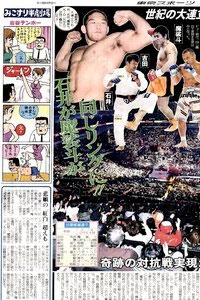 A lot of you may have slept on the dramady that’s been going down in Japan with Sengoku and Dream. Last week I tried to shine a little light on the situation but the article was ill-placed and no one really read it. Note to self: Never publish non-UFC related stories on a UFC fight night…especially when the fight is actually going down. People won’t read it man. The just don’t care about the potential collapse of one of Japan’s largest MMA organization. At the time, World Victory Road and Sengoku’s future looked pretty dire. Fighters were dropping out, sponsors were jumping ship…but one sponsor in particular held both organizations by the…ugh, I hate to do this. By the nuts. Sometimes ‘nuts’ is the only thing that fits, and their nuts were snuggled in the hands of Japanese super-discount store: Don Quijote.

The owner of multi-chain discount store (they even have some in Hawaii) is apparently a massive fan of MMA. Huge. In fact, Don Quijote is probably one of the main reasons why Shooto is even around at all. Their sponsorship enabled Shooto (and Pancarase) to be a competitive force in Japanese MMA. Don Quijote has also been a long-time sponsor of Sengoku. On August 11th 2009, Yahoo! Japan reported that Don Quijote was doing pretty well financially which led Sengoku to sign more lucrative guys like Gono and Ishida.

During Sengoku 10, the organization announced they were changing their name to the astronomically cooler ‘Sengoku Raiden Championship’ and that they would be promoting an event the same time as FEG’s Dynamite!! 2009. If you’re not familiar with Dynamite!!, just imagine stuffing a blender with thermite, plutonium, high kicks and red kryptonite, setting it to ‘rawesome’ and throwing the mixture right in the middle of the Saitama Super Arena. Everyone from Brock Lesnar to Fedor Emelianenko has participated in this bangemite fest known as Dynamite!! (can’t forget the two exclamation marks or the entire universe will collapse…and it will be your fault). So it goes without saying that when Sengoku announced their head to head NYE event, beef started to ensue.

Everyone was stoked, Sengoku purchased a 4-hour time slot on December 31st and out of no where Sengoku’s main sponsor, Don Quijote, jumped ship to FEG’s NYE Dynamite!!. A big ‘holy crap’ was heard from Sengoku’s office and plans for the entire event started to fizzle. World Victory Road (Sengoku’s parent company) ceased ticket sales and they officially announced their NYE event will not take place at the Ariake Colosseum.

Things looked somewhat grim for Sengoku until FEG (Dream, Dynamite) president, Sadaharu Tanikawa, announced a co-promoted Sengoku vs. Dream NYE card that would feature 5 vs. 5 or 7 vs. 7 bouts along with the supercards we’ve come to love with FEG (Genki Sudo vs. Butterbean ftw).  Now it’s being reported that the president of Don Quijote, Yasuda, set up a meeting between FEG to enable this Sengoku vs. Dream co-promotion as an attempt to strengthen Japanese MMA. Initially, Sadaharu Tanikawa planned on letting Sengoku fail and then scooping up as many fighter contracts as possible (including Ishida). However now it looks like FEG’s MMA division may be in trouble. FieLDS, Dynamite!!’s primary sponsor, will not renew their contract next year. Today on NHBNews Pro, it was announced that Don Quijote not only wants to replace FieLDS as Dynamite!!’s primary sponsor…but they want to purchase the entire FEG MMA division (which would include Dynamite!! and Dream). This would mean a chain of discount super-stores will own all of Japanese MMA. FEG will hold a joint press conference with Sengoku tomorrow to inform everyone of what exactly is going down in Japan. If anything goes down, we’ll let you know…in the meantime, gawk at Alistair Ubereem nearly flying out of the White Cage at Dream 12.