Why You Need to Be Watching This Year’s G1 Climax

We made a conscious decision here at MiddleEasy a while ago, one to cover professional wrestling (so this is the new MiddleEasy?!) on here. That means mostly WWE coverage because, well, WWE is the world leader in professional wrestling. They attract millions and millions of viewers weekly, with Monday Night Raw being one of the highest rated programs on cable television week-in and week-out. They also pack arenas twice a week, Mondays and Tuesdays, sometimes even a third time on Sundays for a monthly PPV event. It’s hard to deny their dominance.

For fight fans, though, there is some pushback. Many of us grew up on professional wrestling and found a love for professional fighting along the way, others grew up as sports fans only, never getting to understand the joy of professional wrestling. You see, it isn’t real, so why care about it? It’s the same argument that wrestling fans have heard for years and years, hilariously enough from people who are willing to spend money to see the latest Marvel film in theaters in 3D.

Sometimes, as an adult, it is a bit difficult to justify fandom in some of the storylines and characters that are presented in American professional wrestling. WWE in particular has been better about this of late, but then we get characters like Rusev and Lana, serving as caricatures of old Cold War fears. That isn’t to say that they are bad or not fun, just not everyone’s cup of tea. It’s goofy, light-hearted and fun. It’s classic professional wrestling. It’s also hard to justify to sports fans.

That’s why there are other avenues of professional wrestling, stuff from smaller, independent promotions or from other countries. For the past few weeks New Japan Pro Wrestling has been presenting their yearly singles league, the G1 Climax. Last year the G1 Climax was home of the absolute best professional wrestling matches anywhere in the world for 2013 and this year it looks like they are going to top that.

If you are unfamiliar with Japanese wrestling, in the bigger leagues (now just New Japan, really) there are fewer gimmicks than you’d see here in America. The focus has been on wrestling being a serious sport, even if everyone knows that it’s scripted now. But there are moments where you begin to question if the strikes are being pulled at all. These matches are brutal, they are deeply rooted in a culture that was cultivated in martial arts and the wrestling showcases it.

Here, from Night 1 of the G1 Climax, is Katsuyori Shibata vs. Shinsuke Nakamura. Both men have backgrounds in the martial arts and real fighting, Nakamura with a record in MMA of 3-1, with wins over K-1 veterans Jan Nortje and Alexey Ignashov. Shibata was a mainstay in K-1 HERO*s and DREAM, with a losing record of 4-11, but was used repeatedly for how big of a star he was from professional wrestling.

As you can see, both guys have styles that are based upon their stiff kicks, submissions and throws. The match was also tremendous. What’s crazy is that wasn’t the best match of the tournament thus far. If you guys want to see two guys beating the ever-living snot out of each other, look no further than this crazy, crazy match between Tomohiro Ishii and Tomaoki Honma. Go ahead and count how many times you think that Ishii is dead, it’s insane.

This is only the tip of the iceberg, with Dave Meltzer posting regular updates at f4weekly.com with his match ratings and man, there is a lot of quality pro wrestling going on right now. If you are a pro wrestling fan and aren’t watching New Japan already, now is the perfect time to start. The entire run of events is available via their UStream page, with four live events still to come. Japanese wrestling is beautiful and it’s about time for everyone to come to the warm, loving embrace. 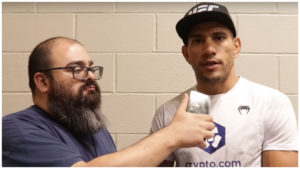 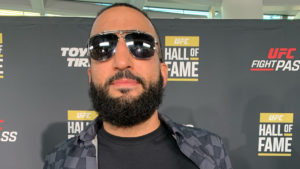