Evander Holyfield does not appear to be onboard for a fight with Mike Tyson at this point.

Evander Holyfield seems to have shut the door on a potential fight with Mike Tyson at this point in his life.

There has been a lot of talk about a potential trilogy bout between Holyfield and Tyson in recent months. Especially since Tyson recently returned to the ring for an exhibition bout against Roy Jones Jr. in which he looked phenomenal.

Recently, TMZ Sports caught up with Holyfield to get his thoughts on the possibility. Holyfield, however, says that it’s too late to make that fight happen now, as he’s officially retired from fighting.

“Not that I know of,” Holyfield said. “It’s too late now. It’s all done now. I’ve been retired.

Holyfield and Tyson have one of the most storied rivalries in combat sports history. First, the pair fought in November of 1996, where Holyfield finished Tyson in the 11th round via TKO to take the WBA heavyweight title.

They rematched several months later in June of 1997, where Tyson famously got himself disqualified. Tyson bit Holyfield’s ear during the fight, leading to the referee disqualifying Tyson, handing him a second-straight loss to Holyfield.

Now, both men are in their late 50s, seemingly retired from professional boxing. However, Tyson went to a draw against Jones Jr. in November of 2020 in an exhibition contest. Tyson performed phenomenally in the contest.

As for Holyfield, he also competed in an exhibition bout recently, facing ex-UFC champion Vitor Belfort in September of last year. Belfort was able to quickly finish Holyfield just over a minute into the first round.

With Holyfield now seemingly done competing, it seems fans can now officially put any hope of seeing a trilogy contest between the duo to rest.

However, Tyson is considering returning to the ring this year, potentially participating in a huge exhibition fight with Jake Paul. Even though Tyson is 56, he could still draw a huge crowd if he fights Paul, a young prodigy with a stellar 5-0 record.

Tyson made millions at the box office with his fight against Roy Jones Jr. in November 2020. Paul improved to 2-0 as a pro after knocking out Nate Robinson in the co-main event of that card. 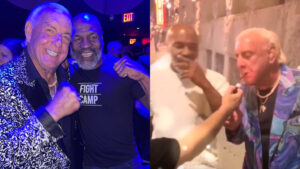 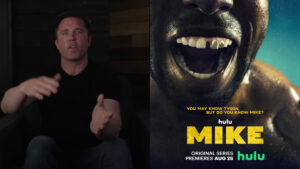 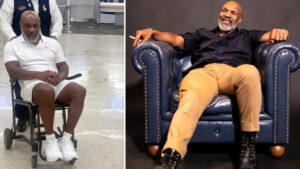