After making waves with her risque weigh-in outfit, Ebanie Bridges scored an eighth round TKO against Shannon O'Connell on Saturday

Ebanie Bridges, known by fans as the ‘Blonde Bomber‘ may be best known for her scantily clad weigh-in outfits, but the 9-1 Australian boxer can certainly hold her own inside the squared circle, as evidenced by her status as the reigning IBF women’s bantamweight world champion.

Live on DAZN, Bridges stepped back into the ring to defend her title against 23-7-1 fighter Shannon O’Connell. Squaring off at the First Direct Arena in Leeds, England, ‘Blonde Bomber’ delivered another highlight reel finish, but not before facing some early adversity.

In the opening round, O’Connell gave the ‘Blonde Bomber’ a run for her money, landing a perfectly timed right hand that wobbled the defending champion. Bridges gave O’Connell her receipt in round two, knocking her opponent to the canvas. O’Connell struggled to get back to her feet, but beat the 10-count and continued the fight. From there, both women delivered a high-paced and heavy-hitting affair with Bridges clearly having the power advantage. Undeterred, O’Connell stood in the pocket and used her speed to counterstrike.

In the end, it wasn’t enough for O’Connell who found herself against the ropes in round eight as ‘Blonde Bomber’ delivered a barrage of strikes leaving the referee no choice, but to step in and call for the stoppage.

With the victory over O’Connell, Bridges moved to 9-1 overall and a winner in her last four fights.

Check Out Highlights from ‘Blonde Bomber’ Ebanie Bridges vs. Shannon O’Connell Below:

A BIG end to the first round for the challenger 😲#WarringtonLopez pic.twitter.com/rIH0TdtfGx

The pace this fight is being fought at 🔥#WarringtonLopez pic.twitter.com/f8rX3Qj9vD

AND STILL 👑@EbanieBridges gets the win with the referee waving the fight off after a brutal combination 😤#WarringtonLopez pic.twitter.com/fzNomXjZEE 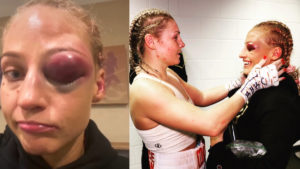 Ebanie Bridges After Her Tough Loss To Shannon Courtenay Last Year: ‘My Eyes Are Bigger Than My Boobs’