With a single punch Conor McGregor has accomplished the unthinkable.

That Irish devil convinced us with his chaos magic and whiskey-tinged silver tongue that José Aldo was old and ready for a new ruler to usurp him. McGregor’s sniper left hand and his KO finishes also helped to butter the lie. Now, we can add this to one of his many predictions that he has simply forced into reality by sheer will.

McGregor lived rent-free inside Aldo’s head since the UFC 189 World Tour. No one is better at what this man does: his trash talk, mind games, the impunity to perform the exact action his opponent doesn’t want him to. McGregor found out Aldo was agitated about the chance of being touched and he made it his mission to get his hand on his shoulder. Even when Aldo started his own trash talk and put his feet up on the dais, McGregor bolted over and stole the belt in what was the most iconic vision in the whole build-up.

At the UFC 194 weigh-in, a small sign was there. McGregor came in low and Aldo, with a gleam of light flickering in his eye, Bruce Lee’d in front of the Irishman. Feeling the shift in momentum, McGregor immediately stood tall, playing a subtle posture game with Aldo. Something so small seems insignificant, but it is what dictated the fight. McGregor adjusts, he adapts and his uncanny sense of distance is simply on a different level.

He said he would be a ghost that he would be there when Aldo didn’t think he was and would be gone when Aldo wanted him to be close. It turns out, that didn’t matter. I was reminded of the time Carlos Condit knocked out Dan Hardy. Both Aldo and McGregor were there, but after one brief exchange, only one remained.

The joker celebrated robed in Tricolour while the division’s king lay down on the canvas, hands stiff upwards, another victim to one of the scariest lefts probably in the whole sport. After recovering, Aldo was visibly crushed and requested a rematch. It was very hard to watch. Such a thrilling and bittersweet changing of the guard. If you’ve ever seen the film Old Boy, one quote stands out: “Laugh, and the world laughs with you; Weep, and you weep alone”.

It is always an exciting feeling to be on the precipice of a paradigm shift and Aldo was a paradigm who refused to be budged, but McGregor is a man who truly strong-arms lady destiny. The prophecy has been fulfilled. Many doubted him, but what can they say now?

Welcome to the McGregor era. 2016 is the Year of the Red Panty. 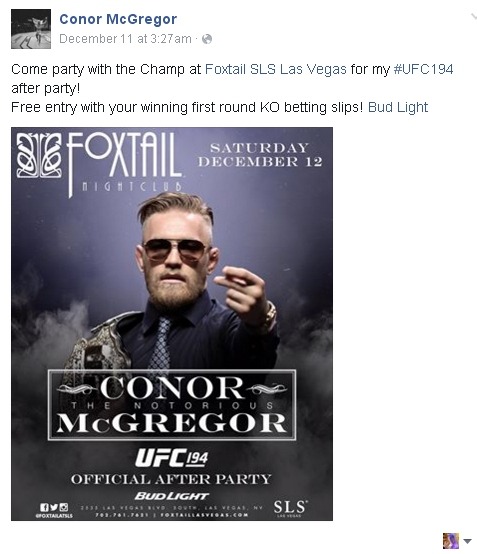 Replay! Conor McGregor knocks out Jose Aldo in 13 seconds and is now KING OF THE FUCKING WORLD
← Read Last Post