Watch Some 12 Year Olds Scrap in a Bathroom Fight Club 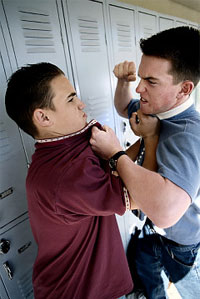 Rural Georgia is a strange and scary place. Camouflage is all the rage here and people drive around in monster trucks with gun racks in the back window, dead deer in the truck bed and bumper stickers that say, ‘The south will rise again’. Its common to drive down a paved road to have it suddenly turn to gravel. In fact, not too long ago I drove down a random side road only to have it dead end into a gravel road called ‘Supper Club Rd’. On one side of the road were a bunch of cemetery grave markers and on the other side was a house with a 43 foot tall confederate flag post out front and an entire living room set on the front porch with the refrigerator in the yard. Creepy. Since there was no other place to turn around I pulled into the driveway and a giant man wearing nothing but overalls and an eye patch stumbled around the side of the house toward my car. I immediately began to hear those creepy banjoes from that old movie ‘Deliverance‘ and a voice saying, “you shuuuur do have a purty mouth”. As I made the tires on my little Hyundai kick rocks and peel out, a pack of about 12 rabid looking pit bulls come from behind the man and ran at my car. If my Hyundai had nitrous I would have used it that day. So scary.

Well, that’s not all that’s scary about rural Georgia. Apparently, there’s a bunch of 12 year olds that can kick our asses out here too. They started their own version of Fight Club in the middle school bathroom, where they bang it out for thirty straight seconds and then return to class as though nothing has happened. Pretty raw, check it out below: