Like how many body punches from Stipe Miocic could the average human take? Unblocked, is anyone making it past one or two before they go full fetal position?

At UFC 241, Stipe melted Daniel Cormier’s stomach with his fists. In round one Stipe threw zero body shots. In rounds two and three he connected on 13 body strikes. Oh, then came round four.

Down three rounds to none, Stipe Miocic adapted to the tune of 14 body punches and Cormeir’s gut perished.

Let’s count them up. All 14. Rest In Peace to the insides of DC.

Then DC eats a right hand to the face and Miocic just bum rushes him. It. Is All. Over. 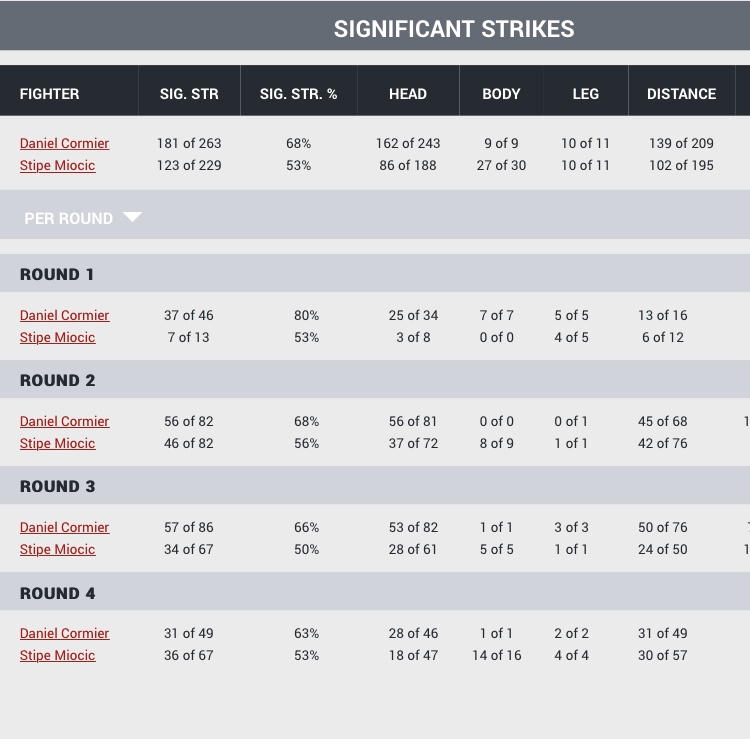 Upon second watch there is also a body shot at the 1:02 mark of round four, but official UFC stats say Miocic only landed 14 out 16 body shots. Looks like 15 out 16 to us and the insides of DC’s belly.

Maybe the most wild part? Stipe Miocic waited two minutes into round four before he even threw his first body shot. LOL what? Then the Cleveland legend just spams the hell out body punches. Button mash your way to winning back the UFC title.

Bas Rutten and his fighting system based heavily on liver punches is so proud right now.

14 body shots is the new 37 d**ks from Clerks. 14? Daniel Cormier’s ribs weren’t even supposed to be here today.