Tyson Fury Revealed He Has Interest In Fighting Francis Ngannou.

One of Ngannou’s primary reasons for leaving the UFC was his interest in professional boxing. He was rumored to potentially fight Fury, including an in-ring promotion with both heavyweight champions. ‘The Gypsy King’ started to re-focus on fighting Oleksandr Usyk, which created concerns about the matchup against ‘The Predator.’

NEW: Like it or not, Francis Ngannou and Tyson Fury does big business. Full discussion of Ngannou’s boxing potential over @DAZNBoxing pic.twitter.com/osftMX3Jv3

During an interview with Seconds Out, Fury called out Ngannou again by saying:

“I know this is a big interview, so I’m gonna take it serious. Francis Ngannou, I know you’re out of contract with the UFC. Wanna earn some big boy money? Come see The Gypsy King, and let’s do a big big fight for the baddest mf on the planet. Let’s kick it up spicy, in a cage, four-ounce gloves, under Queensbury, and let’s have a bada** referee like Iron Mike Tyson. Woah, did I just sell that to the world?”

Ngannou’s future is unclear now that he’s a free agent. Although MMA promotions are likely calling nonstop, ‘The Predator’ seems to be focused on professional boxing. There is a possibility that the former UFC heavyweight champion does a tune-up fight while Fury takes on Usyk in a must-see matchup.

💢 @Tyson_Fury challenges MMA superstar @francis_ngannou to a battle in the cage, with @MikeTyson as referee!

Tyson Fury was leaning towards exhibition fights against Francis Ngannou and Thor Bjornsson before Oleksandr Usyk came back into the mix. Fury, the WBC world champion, and Usyk, the WBO, IBF, and WBA world champion, have an opportunity to unify the heavyweight titles. During the same interview with Seconds Out, ‘The Gypsy King’ had this to say about what’s next:

“If the contract doesn’t get signed with Usyk next for the fight of the century in boxing, then we’ll do the Ngannou fight. Whether it’s gonna be in Las Vegas or Wembley, who will know? We will know quite soon, I think…”

Fury also teased retiring from boxing, but his love for the sport brought him back quickly. Ngannou’s chances against the heavyweight boxing champion have been questioned, but ‘The Predator’ believes he can pull off the upset. It’ll be intriguing to see if the crossover matchup goes down in 2023. 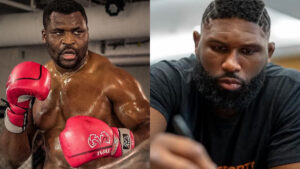 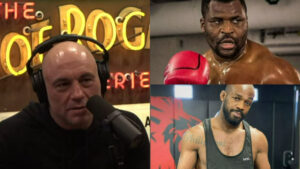 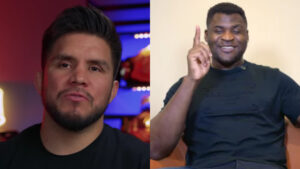