The top 12 wackiest, weirdest items you can buy right now in the UFC store

The UFC store has become something of a sanctuary for old UFC ‘relics’. If you’re after anything with a glitzing UFC logo; Dana White has you covered.

We decided to take a look at the UFC store and try and find some bargains. We’re proud to bring a compilation of our findings. Take a gander at the greatest the UFC store has to offer. 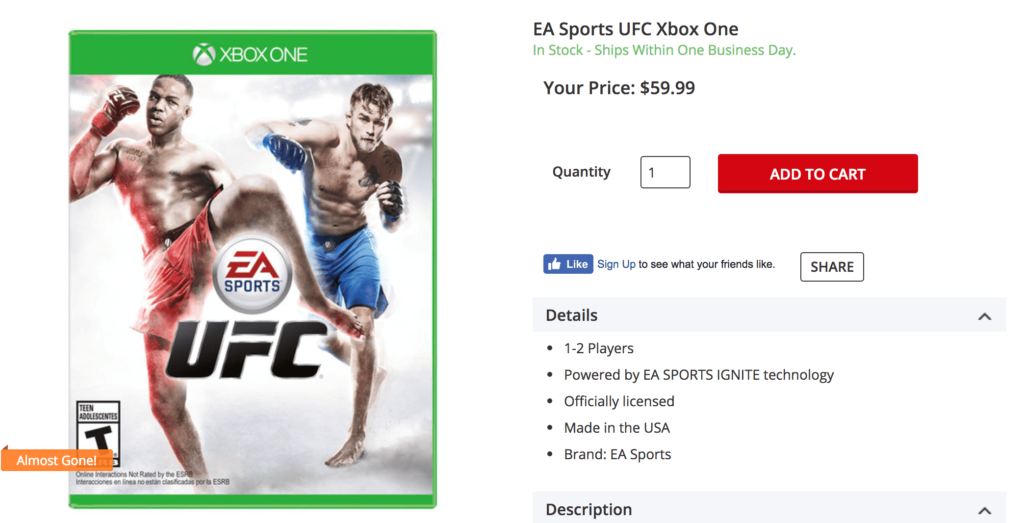 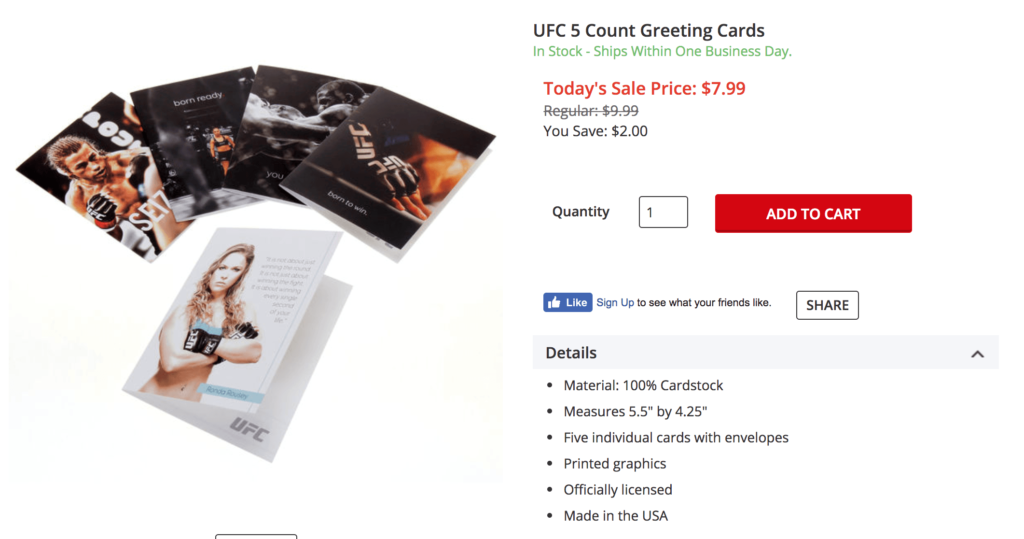 UFC greeting cards = Whoever even contemplates buying these deserve a Stockton Slap. 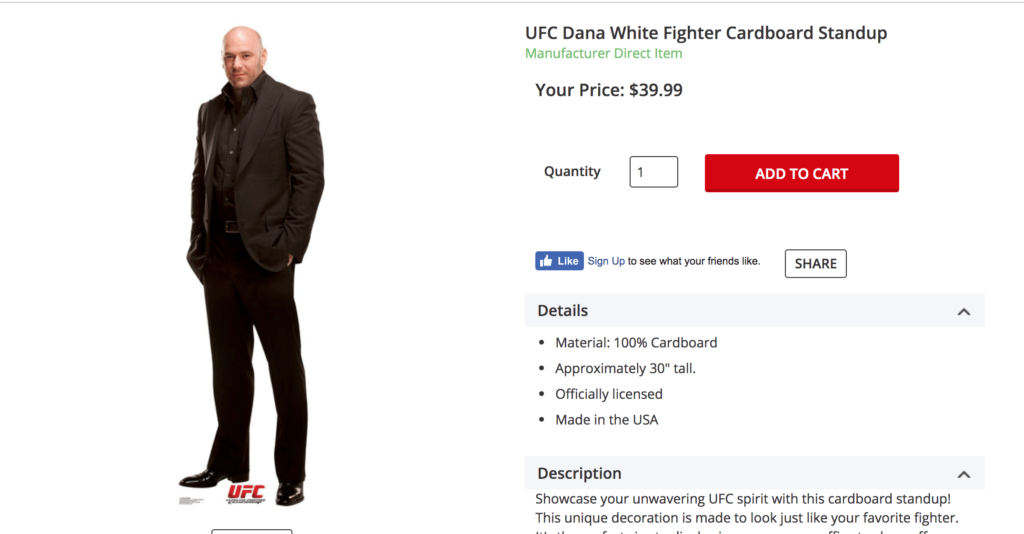 Dana cutout = If you’ve ever watched I Am Legend you’ll be aware of the scene where Will Smith starts talking to the mannequins due to his isolation. I imagine some weirdo has a house full of Dana’s that he talks to. 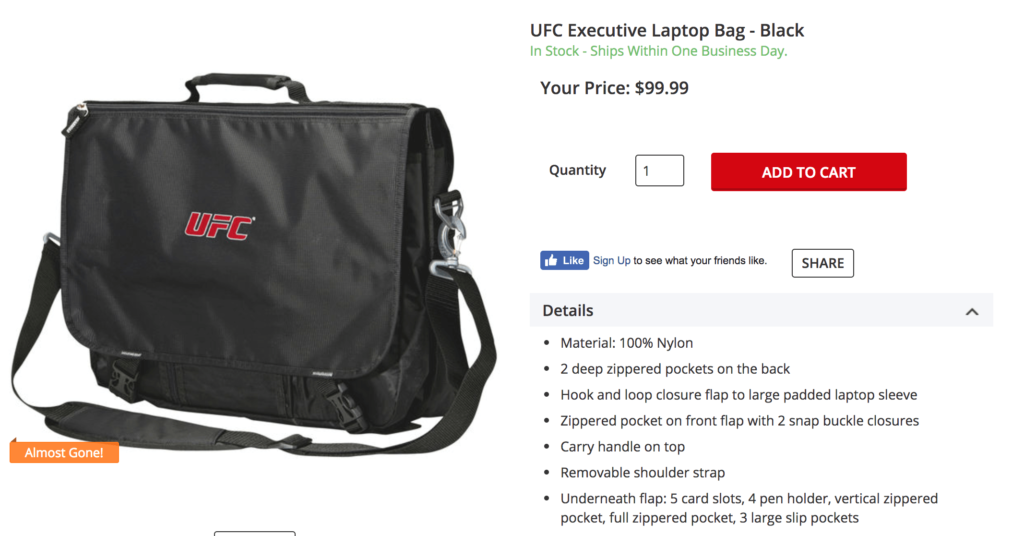 $99.99 for a shoddy nylon bag; the greatest steal of the century. It’s almost gone so get ordering quickly. 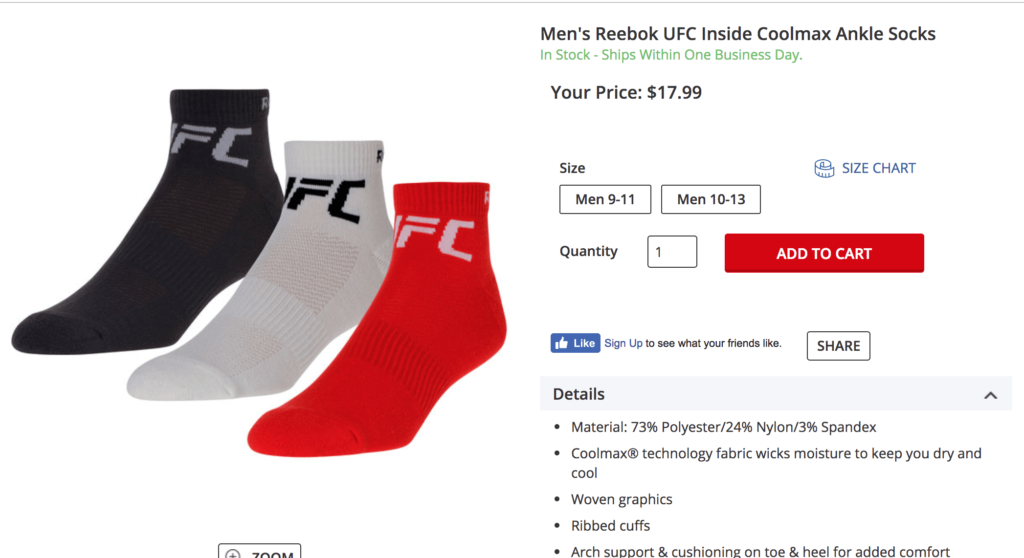 UFC Socks = I’m against all forms of bullying but if you’re going to wear UFC socks you deserve to be bullied. Neuff said. 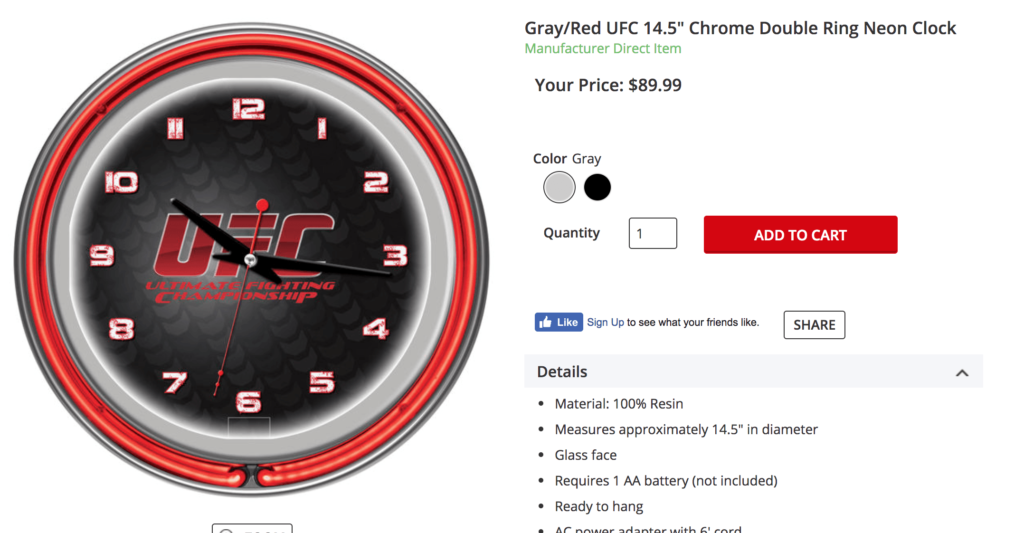 UFC Clock = A tacky item yet one with potential. If it was going for around $10 it may look perfect in a sports bar/man-cave setting.

$399.99 Necklace = It’s awesome to see the UFC appeal to the ‘bling crowd’ but this item should really be $50. I mean it’s essentially made of the same stuff cutlery is made from. It’s mind-boggling to see that it’s nearly sold out. What maniac has $399.99 to squander on UFC jewelry? 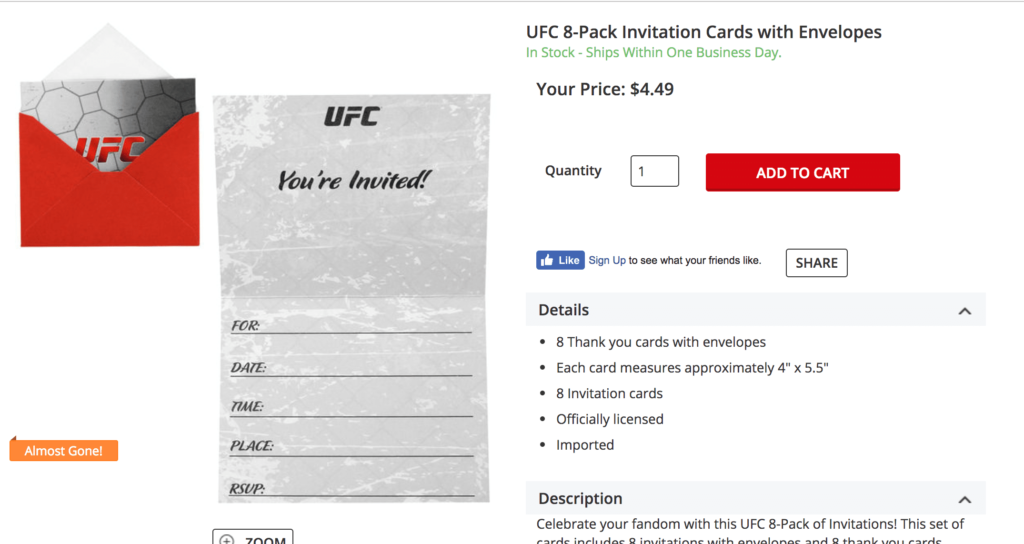 8 pack of cards = working out at 56 cents per card this is actually a decent find on the UFC store. I just don’t see the practicality in a UFC card. 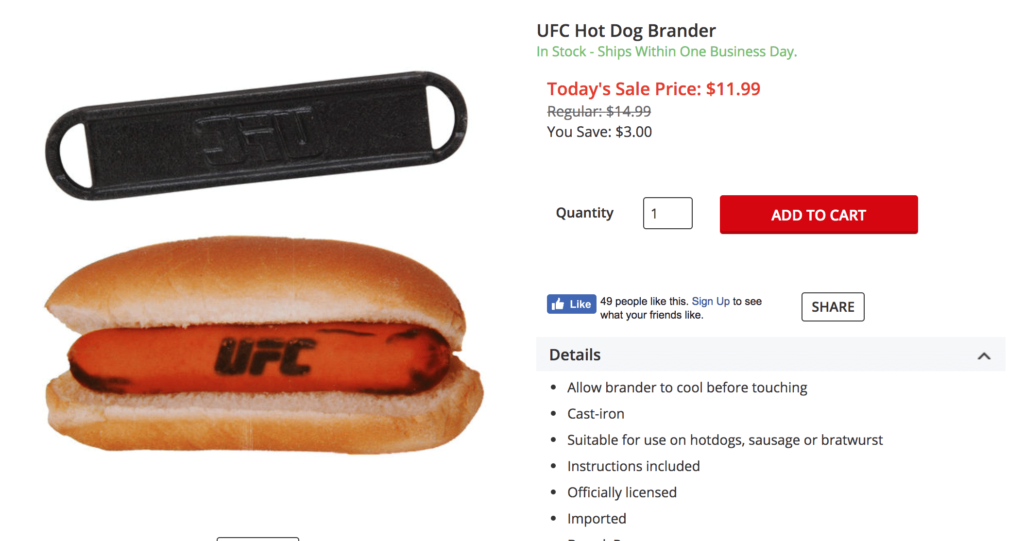 The ‘Notorious’ Hot Dog brander = An infamous meme that’ll live forever in the hearts of MMA fans. I can’t believe they’ve kept it up this long. 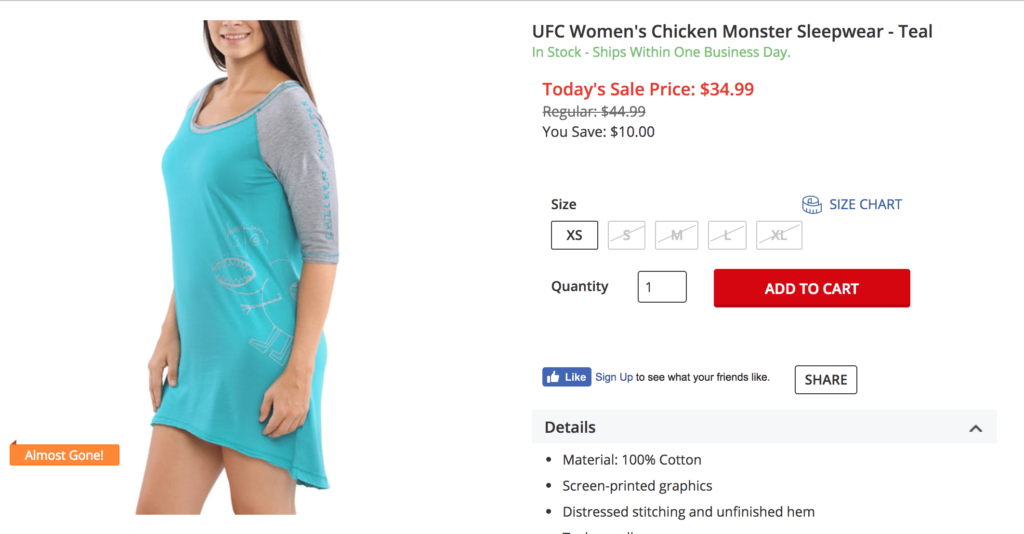 I can’t even begin to describe this item, we’re best to take advice from the UFC store = ‘Celebrate your UFC fandom in this Chicken Monster sleepwear! There are certainly plenty of monsters in the UFC, and more than likely there are a few chickens here and there, but chicken monsters? This cosy and comfy 100% cotton sleepwear features distressed graphics and stitching and an unfinished hem with raglan-style sleeves so you can look great while you’re sleeping – just in case that’s important to you! ‘ 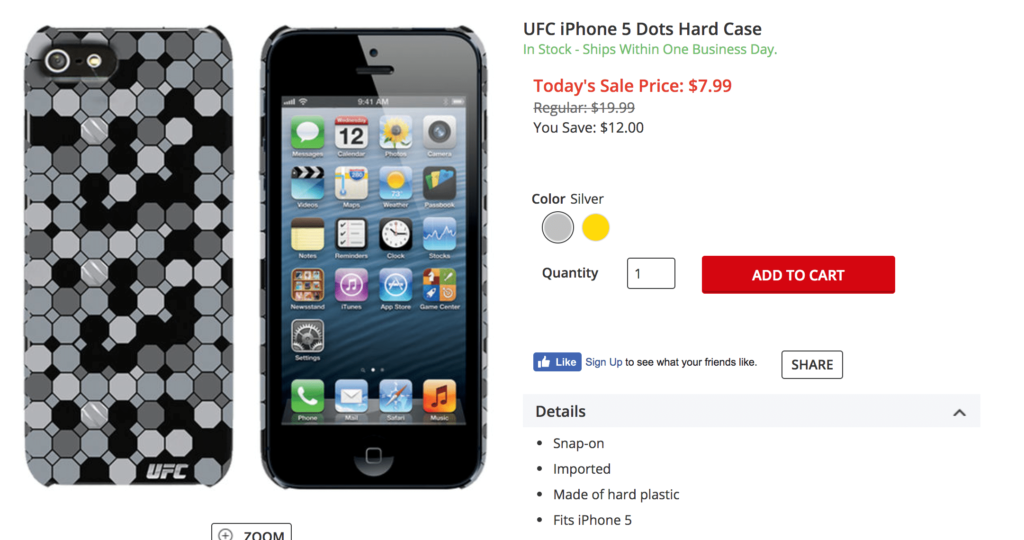 iPhone 5 case = The iPhone is running iOS 6 so it’s nearly six years old. Sad to believe that six years later the UFC are still lumbered with a batch of old iPhone 5 cases. They’re not even referring to the back pattern as an octagon, it’s called dots. 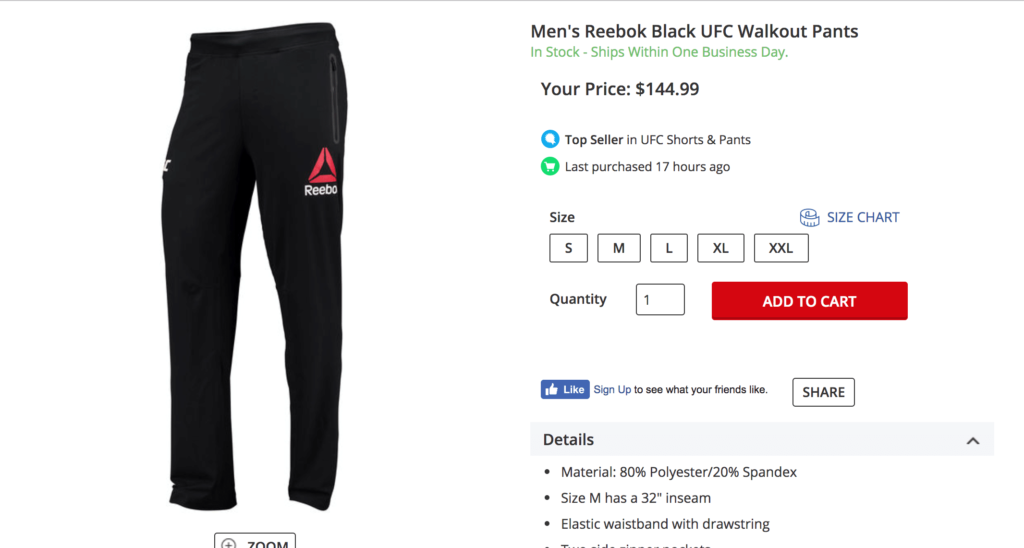 Mens Reebok Pants = Reebok isn’t exactly a glamorous brand; it doesn’t scream luxury. So why are they selling such expensive Pants ? Give me Nike or Adidas any day.