In a complete breach of the unwritten etiquette of social media, the UFC’s official Twitter account has been direct messaging accounts across the MMA Twittersphere (that’s a thing) in order to sell UFC 210.  Your humble author received his own personal message: 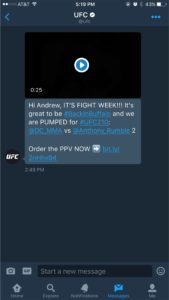 The honor was… overwhelming. And the video was great, until the end where they made it seem like they’d been thinking about Buffalo like a scorned lover for 20 years. Let’s be honest with ourselves, no one in the history of mankind has ever eagerly awaited going to Buffalo. Never mind sustaining that enthusiasm for 20 years. People who live in Buffalo would jump at the chance to leave for 20 years. Offer anyone on the streets of Buffalo a free 20 year lease any place south of them, and 100% of them would abandon their lives instantly. People in Buffalo should be overjoyed that the UFC was dumb enough to promise the state they’d run so many events in the city to get it legal. Otherwise, this card’s happening in Toronto. Anyway, the point is Buffalo sucks and so does getting DMs from corporations.

And naturally, the MMA Twittersphere (yeah, I’m sticking with that) wasn’t as receptive as UFC social media team had probably hoped.

Stop sending me DM spam. It's annoying. Get bent. pic.twitter.com/uQ8Gzdyfbd

Some people took it as a very serious compliment:

so yeah, @UFC dm'ed me and ask me to retweet this, because I'm like a super thought leader in MMA space. #humblebrag #ivemadeit https://t.co/htFGLyJSbL

I just got a DM from the UFC. It's lit

That moment when you get a DM from @ufc !!!! pic.twitter.com/shlEblwyeV

And some poor souls got slighted:

I'm sad. I didn't get a personalized Trollchuk DM from the UFC.

But, randomly DMing dudes like pornbot wasn’t the only bad look in UFC promotion staff had today…

Too be honest, I just feel bad proof reading is a bitch.  But I’m super happy Daniel Cormier is trying to become a champion at two weight classes.  Conor really has changed the game.