Pros React To Mcgregor vs. Khabib Wild Brawl After UFC 229 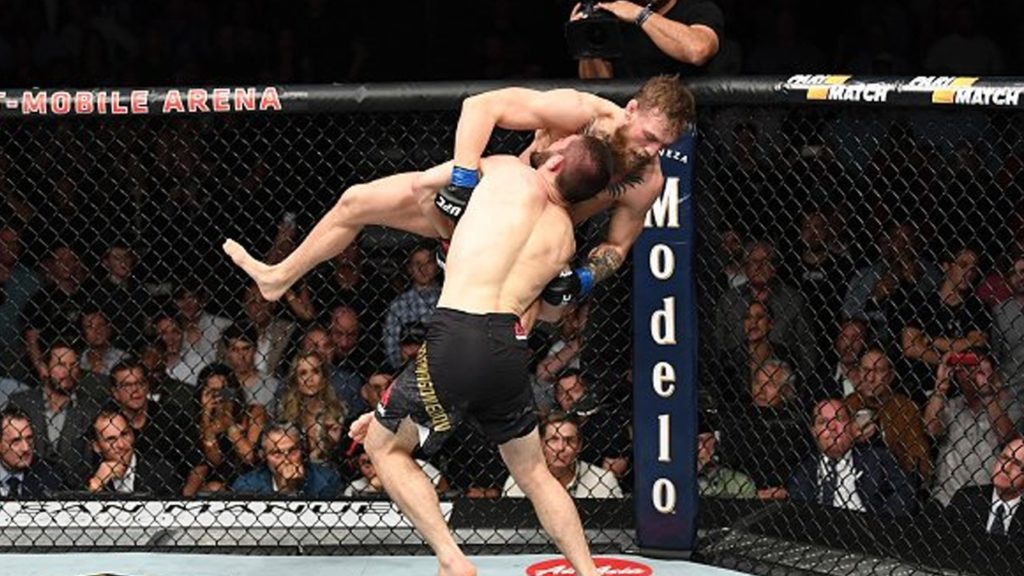 Khabib Nurmagomedov who successfully defended his lightweight title after submitting Conor McGregor via neck crank in the fourth round in the main headliner of UFC 229, which went down last night (sat, October 6th, 2018) at the T-Mobile Arena in Las Vegas, Nevada.

Immediately after the emphatic win, Khabib did the worst thing he leaps the cage and attacks Conor McGregor’s friend and coach Dillon Danis. This attempt from Russian sparked a huge brawl between both fighters camps; the whole thing disappoints UFC.

Check out what pros have to say about McGregor vs. Khabib main event and the crazy brawl which erupted afterward:

Hey guys, two wrongs don’t make it right. Conor didn’t deserve that. No one did. But some things aren’t for fight promotion. Religion, family, country. Throwing stuff in Brooklyn. For Khabib it wasn’t fight promotion, it was really personal. Diff culture man. Sucks

This shit is nuts!!

There’s chaos. Brawls. This is horrible.

His corner just tainted the fuck out of Khabib’s win. #ufc229

Pussy Irish guy attacked a bus with innocent women on it, him and his pussy Dillon daniscorner deserve it all… justice baby!!!

It’s true people love the drama.
But CM didn’t deserve to be sucker punched after the fight, that’s unbelievably shitty thing to do https://t.co/r7PXAdkHrA

All in brawl whatever.. but don’t be climbing fences sneaking up from behind like a dog. That’s just coward shit.

Terrible way to end the event no doubt. Crazy how not too long ago Conor jumped on top of the fence and swung at a referee and now someone that isn’t involved in the fight jumps in and swings on him.

People get mad at @TeamKhabib but forget what Conor has done a few months ago, it’s all fun and games when it’s for hype and attention but sometimes you play with the wrong people!! If you don’t want none don’t start none

If Connor was the one to win and do all the extra stuff Dana would have put that belt around his waist and smiled.

I don’t condone what happened, but you talk that much trash and attack a nation and get that personal you can’t be surprised. Fun fight, but sucks it ended that way I just hope no one gets hurt in the aftermath.

I agree Connor started this from the beginning but Khabib proved his point in the octagon with a dominant performance!! No need to carry it to this extent and stoop to the same level as Connor.

Conor didn't lose his Visa for the bus incident so why would Khabib? Let's be real here. UFC can get anyone a Visa they want to

Just to be clear I don’t condone what happen to McGregor (being attack after the fight) and I don’t agree with Khabib going after Danis. Still Danis needs to stop acting like a fool and McGregor needs keep family out of it. https://t.co/1hUCoaz9cE

Do y’all remember Mac and 30 of his friends raided backstage and threw a dolly at Khabib iNJURING several other FIGHTERS and STAFF. Also throwing mud on Khabibs family , team and country for several months and you think it’ll all be cool?…Now they making Mac the victim here?

Khabib had the chance to be the bigger man. He didn’t.
Connor should have gotten a harder penalty for the trolley and Khabib should get punished hard because of this. Please don’t ruin our sport… it’s important to us #ufc229

One thing I will say and give credit to Connor. He got jumped and cracked pretty clean, and he walked out of there like a fucking man. Honestly looked like he didn’t give a fuck. 👏🏾👏🏾👏🏾 all you Twitter bitches take notes

This fight was sold on commercials about an assault on UFC fighters. They kind of manifested tonight.

Sad. Straight up sad. I’m speechless. The biggest night in UFC history is damaged. I feel bad for Conor, Dana, UFC, and most of all for Khabib. He’s worked his entire life for this moment. One millisecond of emotion ruined it all. #UFC229

Sad. Straight up sad. I’m speechless. The biggest night in UFC history is damaged. I feel bad for Conor, Dana, UFC, and most of all for Khabib. He’s worked his entire life for this moment. One millisecond of emotion ruined it all. #UFC229

Unacceptable! You can’t jump the fence and punch the fighter. Awesome fights but on the end 👎🏽

Conor does whatever the fuck he wants and nobody says shit he’s welcomed back with open arms , khabib hops the cage after all these people said about him and everyone’s like omg what a bad person how could he do that haha

Watching the @TheNotoriousMMA vs @TeamKhabib fight. Unimaginable never thought it would go down like this. Crazier than my fight riot.

A Lesson in Street MMA: McGregor fan gets knocked out at UFC 229
← Read Last Post