‘Power Slap’ President Deems ‘There Is Definitely Defense’ In Matches, Addresses Other Criticisms

The new form of fighting has been criticized heavily since its premiere on TBS last week. Judgement has been passed from topics such as fighter pay to athletes not being able to defend themselves as well as whether or not ‘Power Slap’ is really a sport.

Is Power Slap A Sport?

‘Power Slap’ President Frank Lamicella is facing the heat head-on one week after the promotion’s debut, starting with the legitimacy of the product.

“You’ll start seeing that in the episodes with the coaches where they actually train technique, work out in the gym. I think what you saw in episode one was just the surface and what you’ll continue to see is even more improvement in these athletes and more improvement over the way the matches are run.”

As far as criticism goes, the other elephant in the room is that athletes can’t defend against slaps and must absorb the strike head-on. However, Lamicella argues there is defense when it comes to this league.

“On the ‘no defense’ [criticism], there’s no evasive defense. If your definition of defense is only evasion, then that’s obviously got some element of truth to it. However, again, talking to these guys, there’s definitely defense,” Lamicella added. “There is training the head, neck, shoulder muscles, and our sports science, sports data that we put out will start to support that.

“Learning how tense to make the muscles, how tense to clench the jaw, all of that matters. Learning to roll with the slap but not committing a flinching foul. So, it’s really a lot of timing. When do you close your eyes? Do you leave your eyes open the whole time? There are elements (of defense).”

Earlier this week, UFC veteran Eric Spicely said he was offered a deal to compete in Power Slap, citing the pay was $2K to show and $2K to win. As a result, the new promotion would take some heat on the financial front as well.

UFC veteran Eric Spicely said he was contacted to see if he’d like to participate in the Power Slap League. Not sure what the full pay scale is, but this nugget caught my attention: pic.twitter.com/Qlej95KmJs

Lamicella feels as though his athletes are ‘more than fairly compensated’.

“I don’t think comparing it to UFC today is the right comparison,” Lamicella said. “We’re starting from the ground up here. Having said that, I think all of them feel like they’re more than fairly compensated. For the live event, we’ll probably be throwing some of those bonuses out there like we’ve done in the past or we’ll at least consider it. Let’s see what happens on that front. But, everyone [who] is getting up there, they’re happy when they leave.” 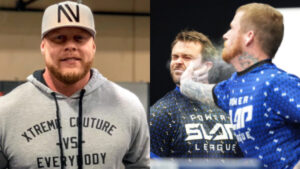 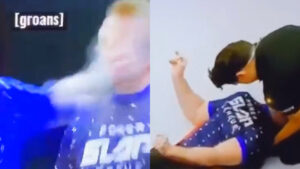