So by now we are all aware that Joe Riggs was cleaning his gun (according to TMZ a Sig Sauer 1911 for you guys out there who get really into that) and forget to remove the ammo, which led to a discharged bullet that traveled through his hand and into his leg. That put a posh on Joe Riggs coming back to the UFC so soon, with Riggs claiming that he’ll be back as soon as he’s all healed up again.

The guy just has to be embarrassed, because this is really embarrassing. So here are some photos from TMZ. They have more in their article, so if you are really into gross things and TMZ we encourage you to go check that out. 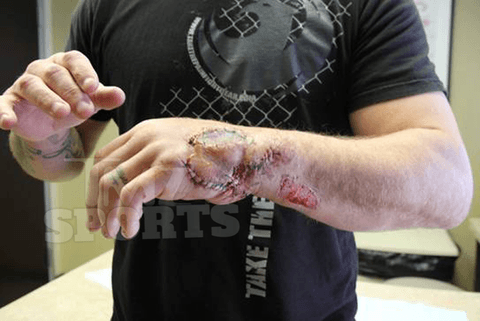 The moral of the story? Don’t play with guns, kids. Play Call of Duty instead.