Gian Galang is a New York City illustrator who really likes Mark Hunt. Why wouldn’t he? According to Vice Fightland, Galang is a “[l]ifetime martial artist . . . who works as an art director for The Brooklyn Brothers.”

In their interview, Galang talked about his inspiration for a piece before Hunt’s fight against Roy Nelson: “Mark Hunt is one of my favorite fighters and I was insanely pumped for this fight. I thought the juxtaposition of Mark’s uppercut and Roy’s overhand right would make for an epic showdown. Luckily enough, Mark ended up winning by uppercut! I had to do an alternate “Super Saiyan” version as an homage to Mark’s hair-dying fight ritual.” As incredible as they are, it’s still debatable whether Galang has outdone Hunt’s perennial artistic superfan Hassy. Perhaps he will create a romantic “Mark Hunt & Me” tribute piece so we can properly compare. 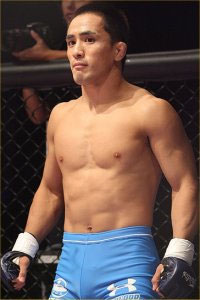