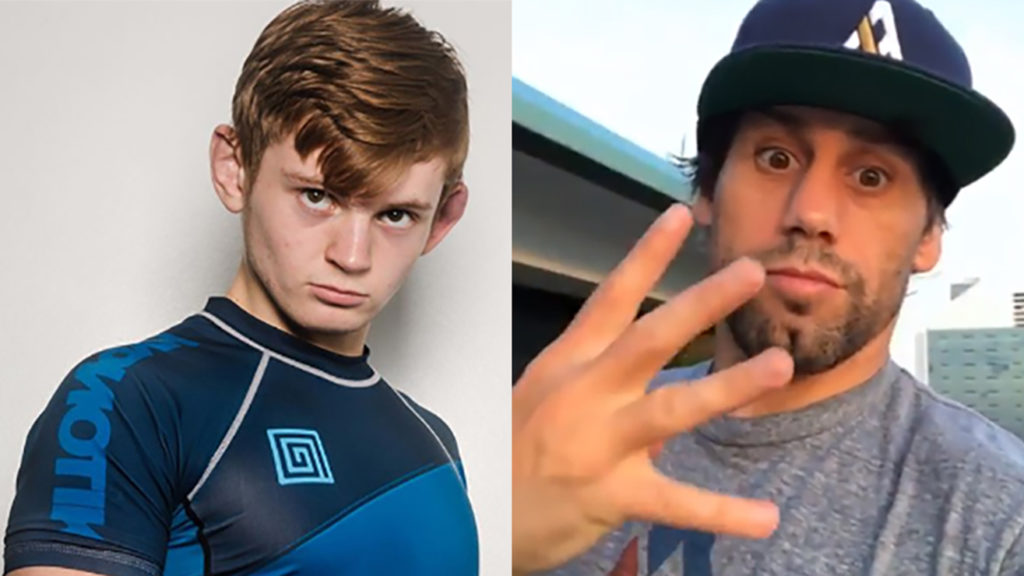 Polaris 10 grappling event went down tonight (Saturday, May 25, 2019) from The Lighthouse in Poole, Dorset, England. It was streamed globally on UFC Fight Pass.

Nicky “The Necklace” Ryan is a younger brother of BJJ star Gordon Ryan. In his last two bouts, Renzo Gracie NYC grappling wunderkind defeated Masakazu Imanari at Polaris 8 via rear-naked choke and did the same thing to the MMA fighter Hideo Tokoro in a special match at Quintet 3.

Urijah Faber is known for outstanding wrestling credentials and very dangerous guillotine choke. “The Californian Kid” last grappled as Team Captain at Quintet 3, where his bout against Pride FC legend Kazushi Sakuraba ended in a draw.

Urijah Faber jogged his way out to the mat first in black trunks. Then the announcer presented the young grappling prospect Nicky Ryan, who walked out slowly, wearing gray shorts, and black-gray shirt.

As soon as the match started, Urijah attacked, and he even made to take Nicky Ryan down. But it seems “The Californian Kid” couldn’t leave his UFC moves at home. It seems old habits die hard. Faber literally slapped Ryan to the forehead while he was trying to close guard in the first minute of the first round.

But the bout quickly became very entertaining. Both fighters were rolling on the mat, and Urijah Faber showed some outstanding defensive skills. Faber went aggressively for head and neck control, but Ryan changed the position well every single time.

Nicky showed amazing levels of stamina and attempted a lot of submissions. But despite the warning, Faber kept utilizing his chest shoves from time to time.

After 6 minutes of the match, Nicky Ryan grabbed Faber’s left leg tight and tried to finish him with a heel hook, but Urijah somehow made to turn his stomach towards the mat and didn’t let his opponent finish the submission. Both fighters were dragged towards the center by the officials.

Maybe the best Urijah’s move was seen when he tried to pass Nicky’s butterfly guard with a jump pass. Yet, the young prospect neutralized that attempt well too.

Young grappling ace remained on his back for the most of the fight and controlled Faber well, but he was unable to submit him.

In the dying seconds of the match, Nicky nearly finished Faber with a fantastic heel hook. But the time was up, and the referee stopped the fight.

One could say Faber outscored the young prospect in chest shoves. Also, whenever Ryan tried to secure arm or leg lock, he had a hard time because Faber was slipping out well. Nicky Ryan won the bout via unanimous decision.

After the match, Ryan said he was disappointed with his performance. Nicky also described how hard it was to obtain grips against a shirtless opponent. Young prospect announced his intentions to move a division up and challenge the champ, Ashley Williams.

Rashad Evans Guarantees That Cormier vs. Jones Trilogy At 265-Pound 'Would Be A Lot Different Fight'
Read Next Post →
Click here to cancel reply.