McGregor vs. Faber almost went down

You know the classic Conor McGregor vs. Nate Diaz fight in 2016? Well, it was very close to being Urijah Faber vs. McGregor.

It was late February 2016 when then-lightweight champion Rafael Dos Anjos pulled out of his scheduled UFC 196 fight with McGregor. As we know, Diaz would step up and fight McGregor, but ‘The California Kid’ was next in line and almost had the fight.

Faber was recently on Morning Kombat, and he reflected on the massive opportunity that he almost had.

Faber knew there were obvious other choices besides him, such as Frankie Edgar, Anthony Pettis, Donald Cerrone, and Diaz. But he would soon find out they were all injured, or McGregor passed them up.

“So I started doing some research, and Frankie Edgar was injured. Pettis was coming off a loss. I know Cowboy was coming off a loss to RDA, and so Connor said, I’m not fighting him off a loss. Pettis had been injured as well and he was on a skid. And then Nate Diaz told [the UFC] to fu*k off because they wanted to extend his contract. I’m buddies with all these guys like that’s one of my value valuable traits is I can get to get to anyone and find out what’s going on,” Faber said. “So, all those guys are out and Dana’s like ‘you’re the guy.’

Unfortunately, Faber wasn’t the guy in the end.

“So, then they go back to Nate. Nate says fu*k you and hangs up on him because they wanted him to extend his contract from 40 and 40 and they wanted to give him like 50 and 50 on like a seven-fight deal something. He was getting so drastically underpaid,” Faber said. “So then they were gonna pay him a million dollars but extend his contract. And then Conor says, ‘I want Diaz.’ Conor made the call.
He didn’t want to fight me. Like we were kind of friends too, you know, and I’m coming up two weight classes. He’s got nothing to win there. His only losses are submissions and I had the most submissions at the time.

The UFC Hall of Famer and MMA legend almost had a red panty night, but it slipped right through his fingers.

Faber would fight four more times after almost getting the McGregor fight. He would retire, unretire, and it seems he has retired again. 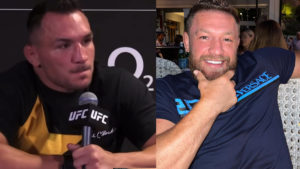 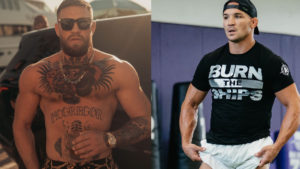