Nate Diaz delivered a digital jab to rival Conor McGregor after the Irishman threatened other fighters, telling them to stay away from his "acting game."

Nate Diaz and Conor McGregor may not be signed to the same promotion anymore, but that doesn’t mean the rivalry is over between the two fan favorites.

McGregor has been on the shelf since his second-straight loss to rival Dustin Poirier at UFC 264 in July 2021. Near the end of the first round, McGregor suffered a broken leg forcing the bout to be called off. It would be his third loss in his last four bouts. Currently, the Irishman is working towards a return to the Octagon which is slated for early 2023. During his time away from the UFC, the former two-division champion has taken up a new profession, announcing he had joined the cast of Road House, a remake of the 1989 Patrick Swayze classic.

During his most recent Twitter tirade, Conor McGregor sent out a general threat to other UFC stars looking to get into the acting game.

“Stay out of my acting game I’ll smash your jaw in,” McGregor tweeted.

Of course, Conor McGregor is far from the first UFC fighter to appear in a major motion picture. Other fighters turned actors that have predated his yet-to-be-released reboot include Ronda Rousey, Randy Couture, ‘Rampage’ Jackson, and Georges St-Pierre.

Never one to shy away from taking a verbal jab at his longtime rival, Nate Diaz responded to Conor McGregor’s tweet, suggesting that ‘Notorious’ should stop acting as though he can still compete inside the Octagon.

“Why are you acting like you can still fight Actor” Diaz tweeted in response.

The Conor and Nate rivalry reignites over… acting 😬 pic.twitter.com/7UccH3tOdJ

Though both fighters quickly deleted their tweets, once it’s on the internet, it’s there to stay.

Nate Diaz and Conor McGregor met on two separate occasions in 2016, splitting the series 1-1. At UFC 196, Diaz gave McGregor his first loss in the UFC with a second-round rear-naked choke submission. Five months later, the two would run it back at UFC 202. This time, McGregor would walk out the victor, scoring a majority decision victory. While a trilogy bout was heavily rumored for Nate Diaz’s last UFC contest, the fight never came to fruition. Both fighters have confirmed they are open to completing the trilogy at some point down the line.

For Diaz, it was his first submission victory since he choked out Conor McGregor six years ago. 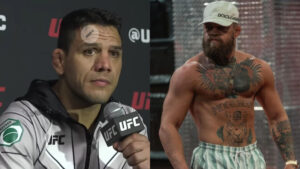 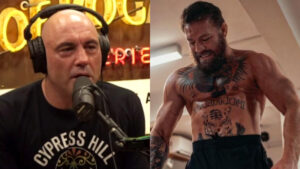