Brandon Moreno took to social media to roast Deiveson Figueiredo for trying to fight Henry Cejudo instead of giving him a rematch. 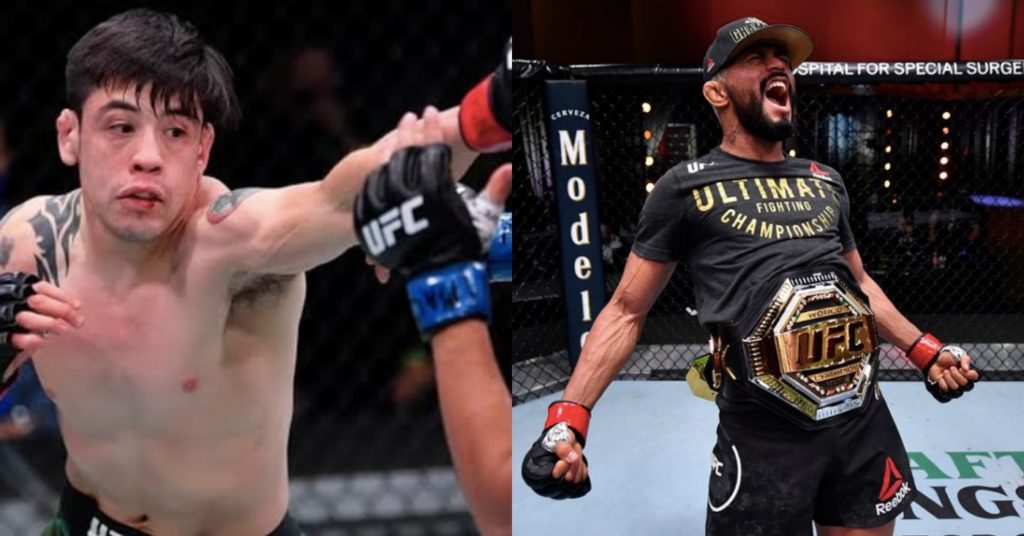 Deiveson Figueiredo and Brandon Moreno fought in an instant classic at UFC 256. Both men laid it all on the line, fighting to one of the closest majority draws in the history of the sport (48–46, 47–47, 47–47). In the eyes of a group of fans, Moreno could have easily left the UFC Apex Center that night with UFC gold. Which, is why virtually everybody is in a favor of a rematch between both warriors. However, Figueiredo seems to have his eyes set on a super fight with retired double champ Henry Cejudo, which caused Moreno to roast him on social media.

The fight between Fig and Moreno ended in a majority draw. Subsequently, Deiveson Figueiredo was able to retain his title. Talks of a rematch have already made rounds in the MMA world and everyone seems to agree with that. Of course, both fighters will need some time to rest after making a 3 weeks turnaround for their classic clash.

However, recently Figueiredo spoke with MMA Fighting to express his interest in fighting Henry Cejudo, leaving Moreno out of the picture.

“[I want] a superfight for the ‘BMF’ belt. If the UFC wants this, I’m in. It would be another great fight to add to my game. They could do a belt between the 125 and 135 divisions, set up a weight and see who’s the baddest mother****er in the lightweights. I want to fight Cejudo, man. He talks a lot, he’s always talking about everyone, so I want to stop this guy. I want to shut his mouth.”

Of course, Moreno didn’t take kindly to being left out of the equation. Especially after fighting Deiveson and giving him his toughest challenge to date. So, he took to social media to roast Figueiredo’s fashion, as well as his championship pedigree.

“Hey @daico_deusdaguerra I heard you want to be the flyweight BMF, but I want to ask you how you want to be a BMF if you can’t beat a little Mexican kid, I don’t want to talk s**t about you brother, you know, not my style,I just want to remember you have unfinish business with me”

“I know you don’t want to see me again in a long time. But tell me what kind of champion you are ?
PD.- you need to fight if you want to buy more of those fucking ugly clothes you wear,” wrote Moreno.

Should Figueiredo move on and try to drag Henry Cejudo out of retirement? Or, does he have unfinished business with Moreno?