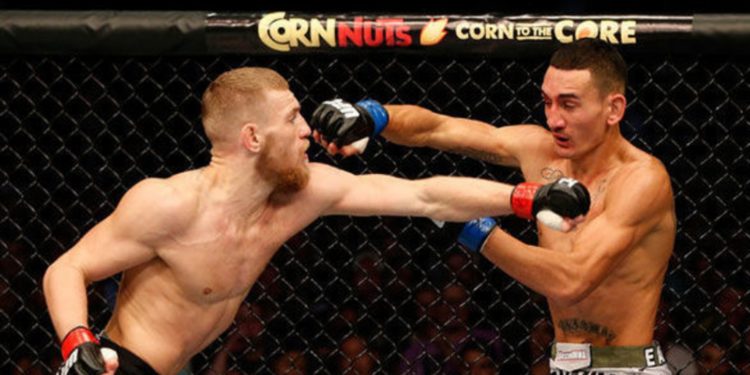 Max Holloway, a former UFC featherweight champ, claims he is sick of Conor McGregor’s cyberbullying. He doesn’t wanna let someone talk random things when he even isn’t his weight class.

Max Holloway is the only 145-pound division fighter that Conor McGregor was unable to finish. Conor has moved to Lightweight, and Holloway plans to stay in the Featherweight division and try to win the belt again. But looks like McGregor simply won’t stop trolling and calling Holloway via various “interesting” names. (via MMAMania.com)

The guy keeps jabbing at me and jabbing at me,” Holloway said on The MMA Hour. “And every time I reply they’re like, ‘Why are you doing this? Why are you replying?’ I’m like, ‘Did you guys ever get picked on? You guys like getting picked on? Stand up for your damn self.’ Then the one time I finally — this guy goes and throws a juicy underhand pitch, I take a swing at it and hit it out of the park, and everybody’s all salty. They’re like, ‘Aw, you’re looking for a money [fight].’”

From the beginning of February, these two are in a cyber war. They had a lot of sparring sessions in the social media. But Max Holloway says it is not all about fighting but shutting cyber bully’s mouth.

“I ain’t looking for a money fight,” Max declared. “This guy’s been trying to bully me the whole time. He’s enjoying his retired life, talking about all this kind of wild stuff, and then the one time I attack him, you guys get on me. Get out of here with that stuff. I know what’s on the timetable, and the timetable right now is Ortega, so that’s my full focus.”

Brian Ortega defeated Max Holloway but he earned ankle injury, so his appearance is currently under a question mark. Preliminary plans include a match in UFC 226 or UFC 227. When it comes to Conor McGregor, everybody is expecting him to face the winner of Tony Ferguson vs Khabib Nurmagomedov fight, which is set for UFC 223.

As long as Conor has a scheduled opponent, his random trolling of Max Holloway will probably continue. Don’t be surprised if you hear more of these unfounded provocations and insults.

Derrick Lewis: “Francis Ngannou Looked Scared, It Threw Me Off In The Fight Too”