Matt Brown believes Conor McGregor’s absence from the USADA drug-testing pool was an exploitation of a loophole.

‘The Notorious’ raised some eyebrows when the MMA community found out he wasn’t being drug tested by USADA after suffering a gruesome leg injury in his last fight. Some fans are accusing the former UFC two-division champion of performance-enhancing drugs to help speed up his recovery.

An injury to Conor McGregor's leg forced a Doctor's Stoppage in the #UFC264 main event.

“I think we all know why [he dropped out of the testing pool] but it’s just a loophole. We can all exploit it. Any of us could exploit it. I don’t think most of us make the money he has to afford that much time off, right? He has the money, he’s still pretty young. He’s young enough, he obviously has the money. He doesn’t have to fight again if he doesn’t want to. Most guys, the vast majority of guys, can’t afford to take a year off, do six months of steroids and six months back in the testing pool. Otherwise, I guarantee you way more people would be doing it. It’s a simple loophole. There’s no reason that guys wouldn’t be doing it.

‘The Immortal’ continued by saying:

The former two-division UFC champion has mentioned on Twitter that he plans to take two drug tests in February and then book a fight. For ‘The Notorious’ to skip the mandatory six months of testing, he would have to get an exemption from USADA, which they recently didn’t seem interested in. That said, anything can happen in MMA, especially when you’re a superstar like McGregor.

I am clear for testing in February. I will complete my two tests per USADA and we are booking a fight.

Matt Brown has changed his stance on performance-enhancing drugs

When the UFC implemented the USADA program in 2015, several fighters, such as Vitor Belfort and Johny Hendricks, rapidly declined, leading to accusations of performance-enhancing drug usage. Matt Brown lost to Hendricks at UFC 185 in early 2015 and has accused him of using steroids. During the same The Fighter vs. The Writer podcast, ‘The Immortal’ had this to say about changing his opinion on PEDs:

“The last card before USADA, I fought Johny Hendricks, I believe I was co-main event — there’s no doubt he was juiced to the f****** gills. So I had tons of criticisms about this stuff back in the day. But when you think about it critically and rationally, I was the fool for not doing it, especially pre-USADA. That was my mistake. My views have changed a lot on that. I don’t necessarily hate on guys for doing it. The next guy’s going to do it, too.”

According to Brown, McGregor is currently not violating any laws.

Since the beginning of MMA and the UFC, performance-enhancing drugs have been associated. As for Conor McGregor, he remains innocent until proven guilty. 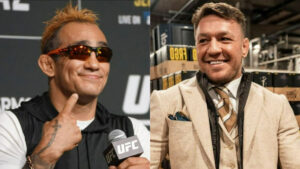