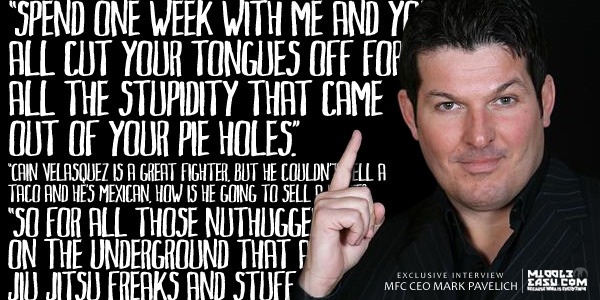 Mark Pavelich and MiddleEasy are sponsored by Good4U Drinks which essentially means Pavelich and I are genetically related. Therefore, whenever I find myself in Canada, I’m entitled to a free pass to crash on Pavelich’s sofa and raid his fridge at any given moment. It’s pretty cool being related to Mark, but unfortunately it hasn’t enabled me to call out every Canadian MMA organization in a press release that is strangely reminiscent of a mid-90s gangster rap diss track. Throw Nas’ ‘One Love‘ in the background and just end each phrase with ‘What up son, whatever’ and you basically have Mark Pavelich’s debut in hip-hop. Check out this excerpt from Pavelich’s ‘Yeah, I said it 5‘.

You weren’t there on Day 1. Why? You are the very definition of a bandwagon jumper. The sport of MMA got hot, and there you were, suddenly proclaiming your love and your desire to run a “big” show. All the Johnny-Come-Latelys are flash-in-the-pan types, and when a cool breeze blows over your little flame, you’ll be extinguished and gone from the game for good.

I never set foot in one these low-rent, flophouse shows, but recently Ryan “The Big Deal” Jimmo, the current MFC light-heavyweight champ, attended because he knew other fighters on the card. He went in wearing the MFC championship belt which is regarded by fans, media, and MMA insiders as one of the most-spectacular looking belts anywhere in combat sports.

This is the same MFC champ who is ranked in the Top 25 of the world rankings – ahead of names like Tito Ortiz, Keith Jardine, and Brandon Vera. These small-time promoters roll out the red carpet, bend over, and cater like servants to these guys, yet they were so disturbed that Ryan brought his belt along to give fans an up-close look that they denied him entry into the show.

The most hilarious part of the whole thing is that while one of the bargain-basement poser promoters is giving Ryan all sorts of grief about coming in with his belt, fans are clamoring all over to Ryan to pose for pictures with him and the belt. Ryan is standing there, having to press the pause button on this slack-jawed yokel to graciously visit with fans who want to see a true champion stand with a real belt – not some replica wrestling ornament that these other shows hand out to any guy with a .500 record.

This is just one example of how these new kids on the block play the game. And just like the boy bands they emulate, they’ll flicker for a while and eventually flame out completely.

It’s OK to be envious, spiteful, and to keep telling yourself you’re in the game right alongside the MFC.

But the truth hurts. You can’t handle the truth. I know you can’t because I know your type.

The truth is you are nowhere close to the MFC and you never will be.

You can’t keep up with us. You aren’t willing to put in the effort. It’s not in your DNA. You will freeload for as long as you can, and then jump off as soon as there’s real work to be done.

Take a good long look in the mirror at 2 a.m. The reflection will tell you the truth.

You are wondering what you can do to catch the MFC.

The truth is … there’s nothing you can do.

Wait, I was serious about that whole Mark Pavelich freestyle thing. I even found the instrumental to Nas’ ‘One Love’. Since I know that someone out there has absolutely nothing to do this evening, I’ll give you three of our freshly printed MiddleEasy stickers (they’re huge) for anyone that takes me up on this challenge. We just got them in minutes ago. Sure it’s a ridiculous premise to substitute Mark Pavelich’s words for Nas and rap it over the ‘One Love’ instrumental, but if we can get an army of you guys to permanently tattoo yourself for free schwag, freestyling over one of the greatest beats in hip-hop is nothing. [Source]