UFC commentator Laura Sanko may not technically be the first female commentator in UFC history, but she is by far and away the most popular among MMA fans.

Starting as a sideline reporter for the promotion after cutting short her own career as a professional fighter, Sanko received the call in January 2021 to commentate an event for Legacy Fighting Alliance on UFC Fight Pass. Receiving high praise for her expertise in the broadcast booth, Sanko was given her shot commentating for the Las Vegas-based promotion on Dana White‘s Contender Series that same year.

Since then, Laura Sanko has been a staple of the Tuesday night fight show. During her appearance on Food Truck  Diaries with Brendan Schaub, Sanko discussed her love for DWCS and how it differs from the UFC’s weekend offerings.

“To be any part of that is just awesome and the stories that come out of that show, like the backgrounds. I get really sucked into the backgrounds that people have because I think it matters. It matters more when you watch them go on and do big things.

“I like the format of it. It’s short. It’s a palatable amount of time. Not everybody has seven hours on a Saturday to watch every moment of a giant pay-per-view card. This is two and a half hours, not a lot of fluff and I love that people, they go out there swinging for the fences. It’s a different assignment. They will… I’ll watch a lot of tape on guys coming into those fights and they will fight so far beyond their own style because of what’s at stake.”

@laura_sanko with some words of wisdom for the next generation of women in MMA ✊ pic.twitter.com/oFiExzROa5

Laura Sanko’s meteoric rise as one of the most appreciated color analysts in the UFC didn’t come without its fair share of adversity. Continuing to speak to Brendan Schaub, Sanko discussed her first foray as a color commentator for regional MMA promotion Legacy Fight Alliance. With just 12 hours’ notice, Sanko drove herself from Kansas City to Wichita only to be met with skepticism and uncertainty.

“They kind of messed up a little bit and didn’t tell the producers that they were bringing me in to do commentary. I literally drive my ass to Wichita. I’m watching fight footage as I drive. I should never ever do that, but also, it was important. And it’s Wichita. Not a lot between Kansas City and Wichita. So I arrive and Ed Suarez is like, ‘Hey, just some issues. Come talk to me when you get here.’ So I walk into this room and there’s 11 men sitting around this table. including the producer and they literally went around and were like, ‘This is why we think you shouldn’t do this.’ They weren’t prepared for it. They weren’t sure I was prepared for it.

“So I sit through this meeting and they’re like, ‘We’re gonna have to call one of the Facebook fights’ and I’m like, ‘Really?’ I am not good at those moments. They’re like, ‘We had a lot of Hawaiian fighters on this card, dude. Maybe you could do a little report on how many Hawaiian fighters there are.’ In my head I’m like, ‘I had this job on ESPN for the UFC. I was so close to crying.

“How do I handle this situation without being ungrateful? Without being a bitch? Being understanding, but also sticking up for myself and being like, ‘No. I know I’m good at this.’ They have me step out of the room and have an hour-long meeting about whether I could do this. They finally let me do it and the ending of the story is like, after the show, literally to a person they were all like, ‘We are so sorry. We just didn’t know.”

Luckily for Laura Sanko and mixed martial arts fans, the LFA allowed ‘Fancy’ to proceed as planned. Needless to say, Sanko knocked it out of the park. Seven months later, she would find a permanent home as part of the DWCS broadcast team. With more than a year passed since joining the Tuesday evening series, Sanko is primed to become a trailblazer once again as a color analyst on UFC Fight Night.

No date has been given for Laura Sanko’s next big step up the ladder, but by all accounts, that day is sooner rather than later. 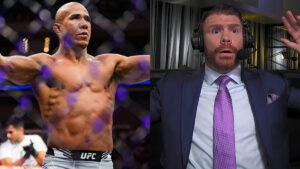