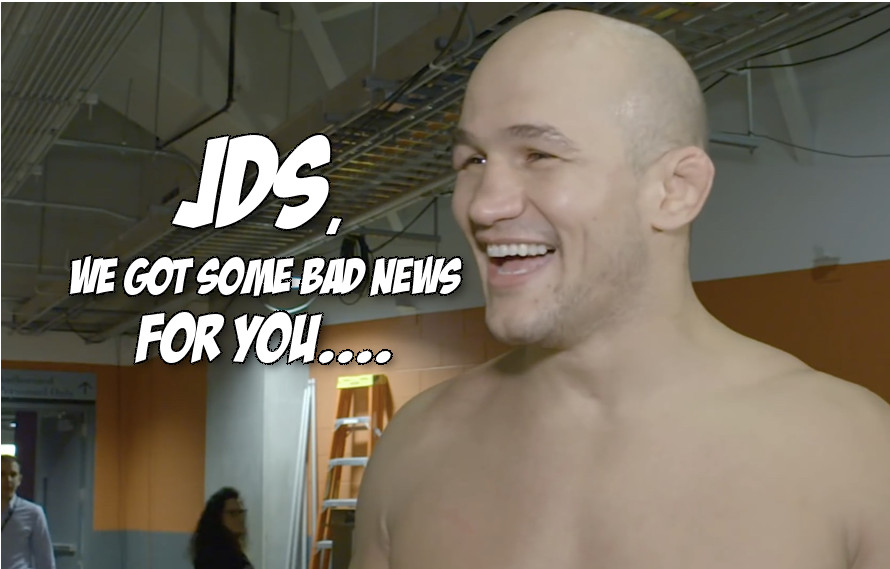 The only way this video could be anymore funny is if JDS said “and as an encore I will sing Michael Jackson’s ‘Smooth Criminal’!” Read that last sentence in an extremely JDS voice.

To be perfectly honest, you have to kind of admire dos Santos. The Internet gets so twisted around in its own bubble, that it’s nice to see dos Santos may have escaped with a shred of humanity intact.

Dos Santos is kind of the anti-Derrick Lewis in those terms. Our big homie The Black Beast is up to date on all the latest memes and viral videos; and the MMA world loves him for it.

Dos Santos? Probably still owns Space Jam on DVD. The DVD still works good, so what’s the point in buying Blu-Ray? JDS already has it. JDS logic could make the world a better.

So when JDS sings a R. Kelly song during his post-fight presser, realize their is no malice. Just another MMA thing for the world to giggle at for roughly 10 seconds.

This isn’t Junior dos Santos modifying AC/DC jams for his own personal use, but it’s close.

Sing it big man and please just don’t Google R. Kelly’s name basically anytime for the next, let’s say 100 years or so.

Hear what @Junior_Cigano had to say about his #UFCWichita TKO victory over Derrick Lewis and what he envisions next 🔊🆙 pic.twitter.com/cLZPePnS0S

Hey, at least it wasn’t Down Low.

Cowboy Cerrone Has A Talk With Nate Diaz : 'I'll Fight You' Under One Condition
← Read Last Post