You know what? Maybe just don’t trust combat sports promoters in general. They are not friends of the fighter or even advocates of the sport. Nine times out ten, any person who wants to get into promoting combat sports likely has something off with them. Kind of folks who look through your drawers at parties and check your wallet for cash while you’re napping.

In this particular case, a bunch of well known MMA fighters fought on a November Bare Knuckle Boxing card and none of them have gotten paid a dime yet.

26 fighters total including, Chris Leben, Phil Baroni, Dakota Cochrane, Hendricks, Isaac Vallie-Flagg and a host of other UFC/Stirkeforce/Bellator veterans are still searching for some kind of money.

In recent interview, Johny Hendricks brought up the lack of funds in his bank account and blames Rutten, who worked as an announcer and helped organize the show, for not warning fighters beforehand.

“Dude, why didn’t you tell us?” Hendricks asked during the Pull No Punches podcast. “He had to have known something. He had to have. Was he sitting here thinking along the same line as that guy? Why hasn’t he said anything? It sucks, the whole aspect of it.”

Bas Rutten took to Facebook with a reply to Hendricks. 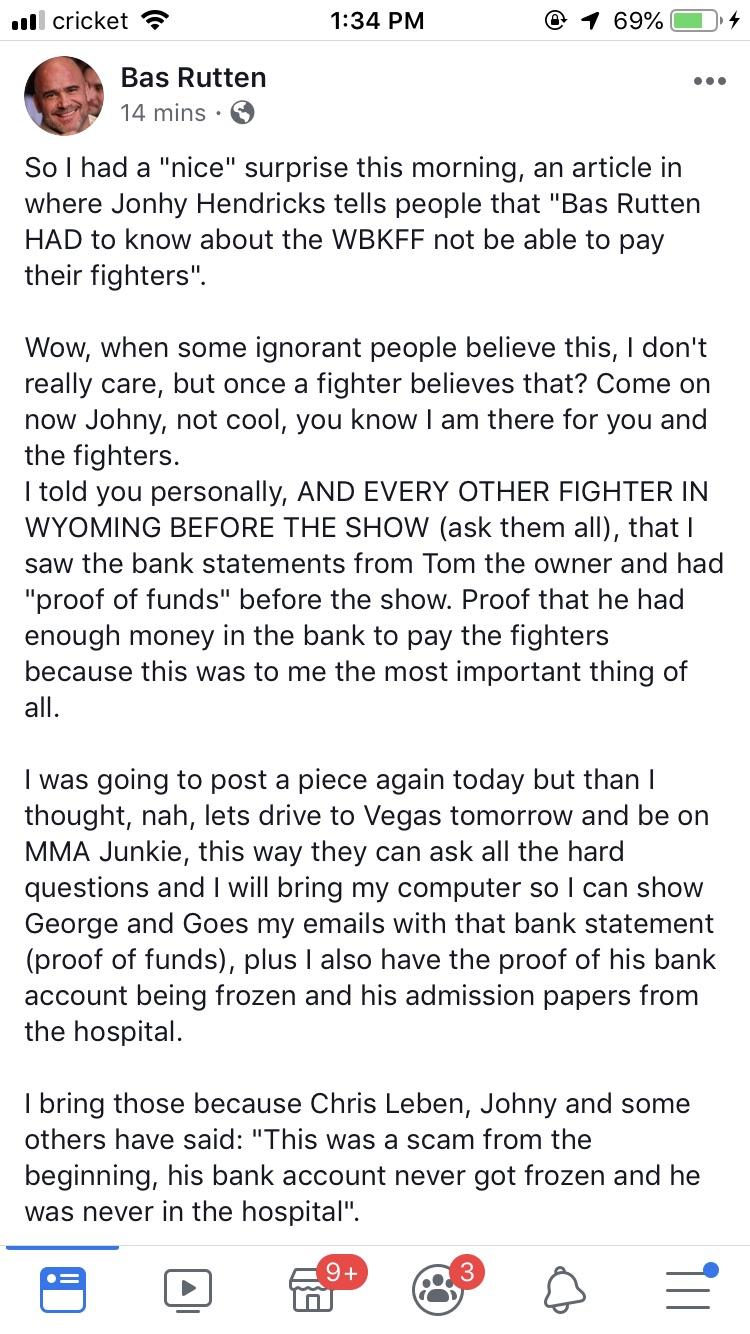 “Wow, when some ignorant people believe this, I don’t really care, but once a fighter believes that? Come on now Johny, not cool, you know I am there for you and the fighters.

I told you personally, AND EVERY OTHER FIGHTER IN WYOMING BEFORE THE SHOW (ask them all), that I saw the bank statements from Tom the owner and had “proof of funds” before the show. Proof that he had enough money in the bank to pay the fighters because this was to me the most important thing of all.”

H/T to MMA Mania for the transcription.

Al Iaquinta Reflects On Painful Loss Against Donald Cerrone: "He Beat The (expletive) Out Of Me."
← Read Last Post

Bas also claims he was never president of the company because even though he told everyone he was in interviews still found online, he never signed a contract, so he's in the clear. This is almost as good of an excuse as when Ross and Rachel were on a break.