In the only female fight in the main card of UFC Singapore, we are looking 125-pound showdown between Jessica Eye (12-6) and Jessica Rose-Clark (9-4). In the collision of two fighters with different performances, Eye is on a cold UFC streak with the score of 2-6, while Rose Clark has never been defeated in UFC.

After five defeats in Bantamweight division, Eye has finally moved to Flyweight where she strives to open up a new positive chapter of her career. She defeated Kalindra Faria at UFC Fight Night 124 via split decision, and she’ll be looking for the finish. On the other hand, Rose-Clark defeated Paige Van Zant at the same event and she is thirsty for blood. War is coming ladies and gentlemen, and we are expecting a decision victory here!

As soon as the fight opened up, both fighters started to trade shots in the center of the octagon. It definitively starts as a boxing match of two angry rivals! Eye tries up with the jab and it looks like her right hand rocked Clark a little bit. Clark looks aggressive but she is simply too short, Eye moves like a cat. Excellent right hand from Jessica Eye but Rose-Clark survives and recovers like a real warrior!

Clark attempts with a right high kick but Eye escapes in the style of Joe Calzaghe. Eye punishes her with low kicks. Great jab by Clark and both fighters open up throwing combos. Eye hits the body and delivers few great counterpunches. The round is over, probably Eye leads 10-9.

Jessica Clark picks up the pace as the round opens up. Eye lands excellent right hand. Clark makes a mistake as she was trying to deliver a fatal body kick and slips!

Clark is in a big trouble, Eye takes an advantage by transiting to the headlock position. Clark was successful getting up, but Eye pushes her towards the fence in the style of a street bully! Clark returns to the center of the octagon and the fight continues. Finally, Clark remembers she has some kickboxing background and starts landing body kicks. She could do that earlier, for God’s sake!

Unfortunately for Clark, Eye reads her attacks and adjust her range, landing punch-kick combinations. Jessica Clark delivers two extremely hard overhand punches from both sides, and she is more active at the moment. But Eye is like a Spartan, these overhands didn’t even rock her, what is this girl made of? Clark continues landing strikes and returns for the pushing on the fence in the same manner. The end of the round, probably 10-9 Clark.

Jessica Eye delivers some strong kicks as soon as the round starts. Good right hand from Eye, but a great counter body kick by Clark. Eye returns with a good body shot. Fighters are trading punches and Jessica Eye delivers a strong body kick as the fighters increase the distance. Eye fires a body kick, landing jab and cross after, but Clark cuts her with a kick. One more body kick, but Clark rocks her head with a great elbow. Eye still stands, how tough her head is!

Clark delivers good body kick but an excellent punch to the body by Jessica Eye. Eye-ties up, delivers a great takedown and progresses to the half-guard position. Clark tries to press her against the cage but eats a strong uppercut! Eye is going into a side control after few unsuccessful keylock submission attempts, Clark defends well. Round ends up with Jessica Eye attacking off the top.

Action is heating up in round three. 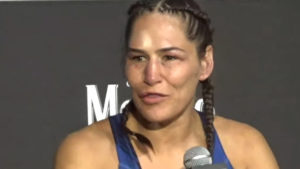 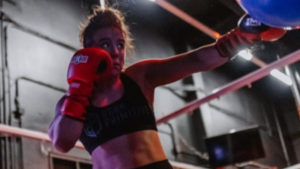 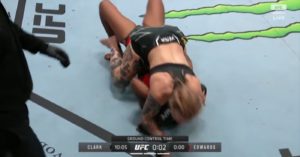 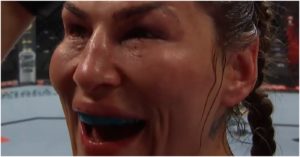 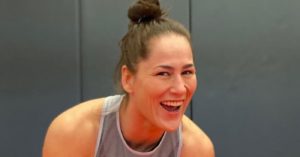 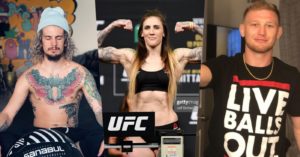