How To Watch Ortiz VS Del Rio: Live Stream And Start Time

The time is finally here, the fight you never thought you wanted to see so badly goes down tonight in Hidalgo Texas. For the money, clout and fame, 44 year old Tito Ortiz will be taking on the 42 year old retired pro-wrestler Alberto Del Rio in a *checks notes* “grudge match”. And well… we’re all kina hyped to see whatever sort of weirdness the MMA Gods have in store for us.

Here at the secret MiddleEasy HQ, we’re of the mindset that MMA is typically at its absolute best when the weirdness shines through and tonight it appears to be an MMA christmas of sorts.

Heading into tonight, Ortiz (20-12-1) has been on one of the weirdest possible runs in MMA history, obliterating both Chuck Liddell & Chael Sonnen in comical freak-show matches. Tonight is set up to be another enthralling freak-show as he’ll be taking on Del Rio (9-5) who is making an MMA comeback of sorts. The Pride Of Mexico is fondly remembered in hardcore MMA circles for being on the receiving end of a Mirko Cro Cop nuclear death kick at Pride Bushido 1 in 2003. But despite the one synonymous moment, Del Rio still had a hugely successful WWE career and he is a Mexican hero, tonight’s fight has the vibes of PRIDE FC written all over it and we’re hyped. 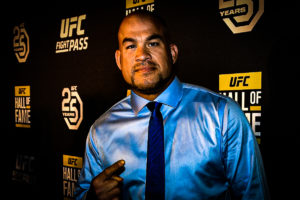 Both Ortiz and Del Rio have been beefing with each other for ages too, you may remember the face-off / shove-off when the pair met for the first time. Essentially, Ortiz is a massive MAGA dude who loves Trump and wants to build the wall, whilst Del Rio is more socially liberal and wants an open border policy.

The stoking of the hyper-partisan flames has caused a little bit of a divide online with fans either lamenting or adoring one of the pair.

There’s also a few other fun scraps on the card as undefeated strawweight Melissa Martinez  (6-0) faces off against Desiree Yanez (5-1) and Combate typically always put on great shows as most of their fighters are stand and bang strikers.

Tonights card kicks off at 2am UK time, 9pm Eastern Time & 8pm Central Time. You can watch the fight courtesy of the good folks over at Fite.Tv

How To Watch Joshua Vs Ruiz 2 Live Stream On DAZN
Read Next Post →
Click here to cancel reply.