UFC Welterweight Leon Edwards has a serious issue with Tyron Woodley being placed above him in the latest UFC rankings. Especially because the former welterweight champion has been dominated in his last two outings by current champion Kamaru Usman and a contender in Gilbert Burns respectively. Due to Leon’s words, it didn’t take long for Woodley to respond to Edwards. Although in the opinion of many fans, Woodley’s response didn’t make much sense.

Gilbert Burns was able to easily crush a former champion, Tyron Woodley. As a result, the performance was probably the best and most important win of his career. ‘Durinho’ excelled as he controlled Woodley from bell to bell. He even effectively dropped Woodley with punches. Which impressed a lot of fans who believe that Burns is truly a grappler at heart. He dominated T Wood in every facet of the sport. Which, has now earned Burns a #1 contenders spot at the Welterweight title.

While that news is great for Burns, that isn’t the case for Edwards. Leon has managed to rattle off an impressive 8 fight win streak in the 170lb division. Which many consider being the toughest to climb beside the lightweight division. Unfortunately for Edwards, Woodley still holds a spot above him in the new official rankings. 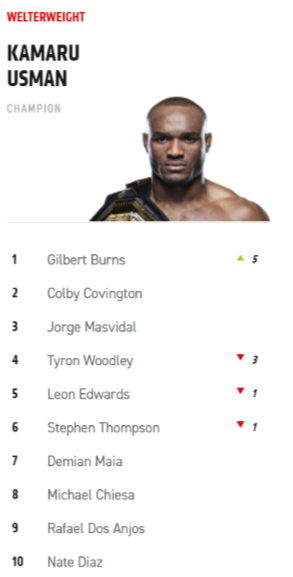 Leon was vocal about Woodley being ahead of him stating that a fighter coming off back to back losses should not be ahead of him. And of course, Tyron saw the tweet and responded.

https://t.co/1s3DVGlRJ0
Watch to the end and you will see why. Like the other 4.5million people use as what "NOT" to do if something pops off. https://t.co/DkcdfNF7aC

“Watch to the end and you will see why. Like the other 4.5million, people use as what “NOT” to do if something pops off,” wrote Woodley.

Many fans immediately questioned Woodley’s response because they feel like he hasn’t won a single round in his last two fights. Some even feel like he shouldn’t be ranked on Edwards after two losses where he was completely dominated. As far as Edwards goes, he has yet to respond to Tyron’s “diss.”