For me, Sundays are a rare chance to be reflective. I purposely don’t schedule anything substantive to do because I believe in the power of reflecting on the past. So on the day the Lord rested, when my mind turns to MMA, I give myself the brief opportunity to look back. To take the long view of history, before the never ending assault of events and new hype propels me forward into the unknown…

On this Sunday, I can’t help but ponder on “The Lionheart” Diego Sanchez.

A man who started his career “The Nightmare”, an undefeated prospect tearing through the sport’s biggest names. He was pushed too fast, facing competition beyond his development, but somehow persevered. For the first five years, Sanchez was major star for the UFC becoming ranked in two separate divisions, beating names like Kenny Florian, Nick Diaz, Joe Riggs, and Karo Parisyan. At the tale end of 2010, Diego fought Paulo Thiago. The Fight of the Night war would mark a shift in Diego Sanchez career. This fight and the following four can be considered the absolute finest of his career. He went 3-2 in these fights beating Thiago, Martin Kampmann, and Takanori Gomi, losing to Gilbert Melendez and Jake Ellenberger. In every one of these fights (except perhaps Gomi), Diego Sanchez sustained a beating that would had ended lesser men. These fights created a legend, a myth, not just in the sport, but also I believe in Diego’s mind. A belief in Diego’s inhuman ability to absorb violence. To take punch better than any man.

During the lead up to the Kampmann fight, Sanchez declared himself transformed by the light of God. He dubbed himself “The Dream”. Combined with the unflappable chin, intertwined within Sanchez’s unfathomable self-confidence, was his spirituality. The man had channeled lighting storms and mariachi bands. He quoted Tony Robbins and the Holy Scripture. But, the Spirit of Diego Sanchez cannot be contained within one religion or culture. He is a yogi, a zen master, a Buddhist, a Christian, a Spartan, and a Berserker. Diego Sanchez is the fighting spirit itself, made flesh.

Only last night, he lost by a lopsided knock out, vicious knockout. Only two years ago, the idea of Diego losing by stoppage was insane. Even though he was losing fights, to people like Gilbert Melendez and Myles Jury, he was just being technically out-fought.He was the victim of younger, sharper fighters. He was just being “out-pointed”. He was still unstoppable; he was still “The Nightmare”, dangerous to the very last minute.

But that’s not the case now. It was fine to watch Diego three years ago, spouting off insane babble and losing firefights to actual  contenders. But somewhere around the Ricardo Lamas fight, we all started to realize jsut how borrowed the time Diego was running on. All along, we knew the damage would eventually be too much. But each fight was too thrilling. Eventually, we all knew that iconic chin, that had been tested so many times, eventually that chin would fall, it would creak, and when it did, all the king’s horses and all the king’s men ain’t putting that shit together again. The Joe Lauzon KO should have been a wake up. Since when has Lauzon KOed anyone? Jens Pulver? And the next real striker (Marcin Held doesn’t count) did exactly the same thing… What are we supposed to do with our Warrior Prince, the Lionheart?

I, for one, still think there is MMA left in the heart of Diego Sanchez, and goddamn it, as long as he’ll keep doing it, I’ll be there along for the ride.  War Lionheart! War Diego Sanchez!

Update: Compelling evidence has surfaced that Diego Sanchez may be the product of government generic programming. For years, the US army has sought to create “chameleon” fighters that would mimic there opponents. Diego Sanchez could possibly represent the earlier trials of such a program. I submit my evidence in the form of photos of Diego Sanchez, throughout his career. Note his adjusted appearance to ever so slightly match his opponent. Notes how he chameleon-ed in these three fights: 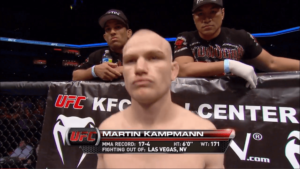 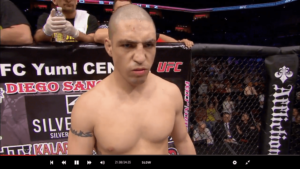 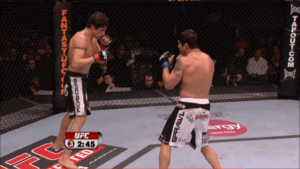 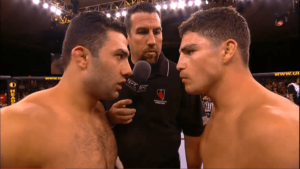 After some fights it seemed like he had taken some of his opponents appearance afterward. After the Clay Guida fight, Sanchez’s hair seemed longer and more vibrant the following three fights. We’ll keep an eye on this compelling story and give you any breaking news as it surfaces. Stay woke.