Mackenzie Dern showed that her striking could get the job done at the highest level. 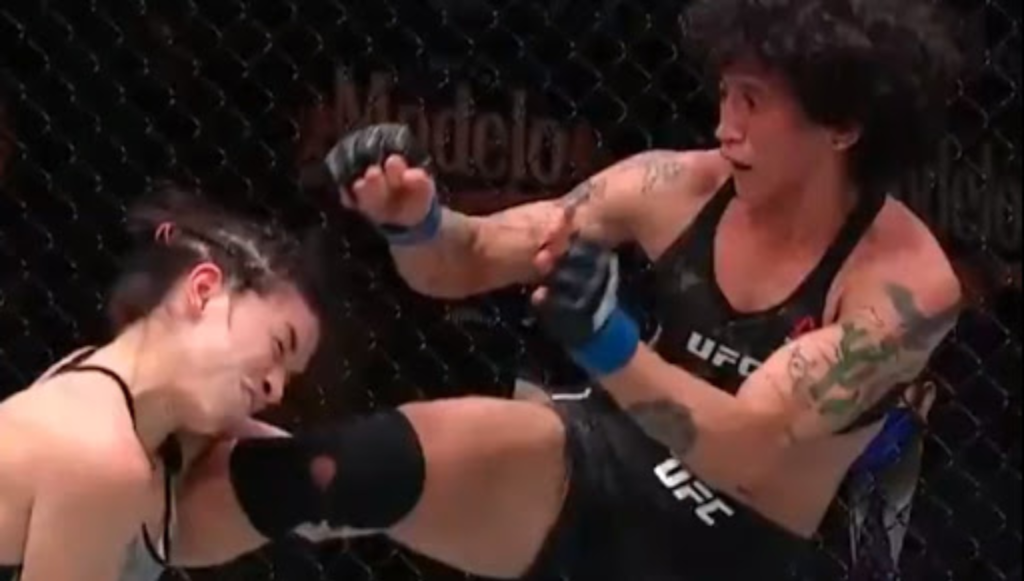 Up next, the jiu-jitsu phenom Mackenzie Dern (8-1) returns to the octagon. She faces off against fellow Brazilian Virna Jandiroba (16-1).

Dern looks to be aggressive early in the fight. Both fighters exchange in the pocket before breaking up. Jandiroba lands a nice right hand as Dern tries to cut the distance. Jandiroba seems like the more comfortable fighter on the feet but Dern’s pressure is effective. She lands a nice right hand before eating a kick in return. Dern surges in with a combination and dips for a takedown attempt. Jandiroba defends well but stays pinned against the fence. Dern is winning the battle on the feet with pure aggression despite being unable to take her opponent to the mat. Nice leg kick lands for Dern, she eats a body shot as the round ends.

Different round, same strategy for Dern, she marches forward and throws punches hoping to overwhelm Jandiroba. Jandiroba trips Dern but she gets back up and starts attacking again. She forces a clinch but gets pinned to the fence. Dern lands a nice knee to the body before Jandiroba answers with a right hand. Both fighters trade in the middle of the octagon. Dern pokes Jandiroba in the eye and the action is stopped for a few seconds. Dern catches a kick from Jandiroba and attempts yet another takedown but fails. She jumps over her in a clinch and pulls guard. Dern appears to be massively bleeding from a cut on her face and struggles to see. Jandiroba maintains top position and looks to land some ground and pound. Dern attacks an armbar but Jandiroba wiggles out. End of the round.

The fighters hug as a sign of respect at the start of the third round. Dern gets on the front foot right away and starts swinging for the fence. She gets into a clinch and lands two nice knees to the body before breaking away. Dern lands a right hand to the temple of Jandiroba before eating a counter left hook. Jandiroba walks right onto a jab from Dern and backs off. Dern goes for another takedown. As she attacks the single-leg Jandiroba lands some elbows before spinning and putting Dern on the ground. Both fighters get back up and start trading again. Dern lands a solid jab and misses with a spinning back fist. Jandiroba lands a nice combination and pushes Dern into the fence. She gets reversed and taken down immediately. Dern passes the guard with five seconds remaining and lands some ground and pound.