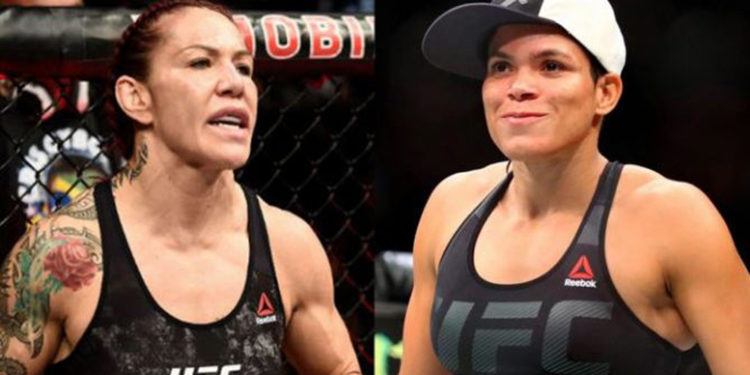 Amanda Nunes will face Raquel Pennington in the main event of UFC 224, in her home country, Brasil, on May 12th, and try to defend the title. The Lioness also mentions an undefeated Brazilian Ketlen Vieira for a possible next rival in the future.

Cris Cyborg earned a tremendous KO victory over Yana Kunitskaya at UFC 222, and she believes that Amanda Nunes negotiates with the UFC, hoping for a better deal.

Cris Cyborg insists that Amanda Nunes should accept their fight at UFC 226 in Las Vegas, Nevada, on July 6. If Amanda declines or tries to lengthen, Cris Cyborg claims she “won’t be investing more time in trying to make this fight happen”.

The full statement is here. (quoted by MMAFighting.com)

“I am starting to think Amanda Nunes only brought up my name to negotiate a new deal with the UFC, like a lot of the girls she just wants to use my name to build her brand. She talks about texting Dana White and saying that she just wanted to fight again quickly and didn’t want to be in a position where she was waiting for a fight but then you look at the girl’s record and she fought one time in 2017. UFC 224 will be almost a year since her fight against Valentina [Shevchenko], a fight against a flyweight that a lot of people think she lost.

Before I fought Holly Holm, Amanda had her coaches giving interviews saying she wanted to fight me. Immediately after the Holly Holm fight I gave her a July date and then she went quiet. You can even see the conversation between me and her girlfriend [Nina Ansaroff] on Twitter. When the UFC called me about accepting a last minute fight to save UFC 222 I asked for Amanda Nunes, but suddenly she wasn’t ready and the UFC couldn’t get her to accept the fight.

One interview Nunes will tell people she just wanted to get back into the ring and stay active and that was why she wanted the fight against me, and then in the next interview she says she needs time to put on weight before accepting a fight with me.

People need to understand my management has put a lot of time into making the fight happen already. July 7th will be six months since I beat Holly Holm and Amanda first called me out, which is plenty of time to adjust to the featherweight division. Amanda isn’t a small bantamweight, she just wasn’t successful enough at 145lbs to earn a title shot against me. When Amanda canceled her fight against Valentina, I don’t care what she says, people on her own team have told me it was from a bad weight cut and not that ‘sinus excuse’ she used to get out of the fight.

Now I’m sitting here looking at a July fight date and Amanda is set to compete at UFC 224 instead of agreeing to our fight and letting us get started with the promotion. The reality is my team has been trying to put this fight together since December and Holly Holm, and if Amanda is saying she needs even more time than July (six months) to put on weight and make this fight happen, then that tells me she has no plans of returning to bantamweight after our fight.

If Nunes plans to make this superfight happen in January, then I think she needs to just be honest with the fans and vacate the 135lbs belt because there will be girls like Ketlen Vieira who have earned their shot at the title and don’t deserve to have to wait for a year for that to happen.

If Amanda isn’t ready to go for UFC 226 in Las Vegas I have told my team I want to fight whoever is ready. I explained to my manager that if Amanda wins in Rio and then declines the fight for July that I don’t want to invest any more time into trying to make this fight happen. We can visit the fight again if Nunes decides to return to featherweight and establish herself in the division against the number one contender. The nice thing about Nunes facing Pennington in Brazil is it will give me team another opportunity to see how big of a fanbase she has in Brazil and how many PPV buys she can sell in the USA giving us a better picture of her side of the superfight.”

What do you think, will this super fight even happen?

Bellator Fighters Clap Back At Dana White Over Disrespectful Comments