Conor McGregor Hints At Interest To Run For President Of Ireland: ‘Why Not?’

"The Notorious" appears to be keen on taking his talents to politics.

Conor McGregor has yet to make his long-awaited UFC return but that doesn’t mean he isn’t keeping himself busy. In fact, “The Notorious” is already picturing himself doing other big things besides MMA.

The former two-division UFC champ had already made great strides in business when his product previously made it to Amazon’s Top 10 Seller’s list. And now, McGregor is flirting with the idea of running for president of Ireland.

In a recent tweet, McGregor expressed his disappointment with the Irish government and said he might consider running for a position in Áras an Uachtaráin, the official residence and principal workplace of the President of Ireland, which only goes to show he wants to be the ruler of his country.

“I may run for Áras an Uachtaráin. I am still too young to currently. But to sit and over see this nonsense, at a closer view, in a position where a response must be given, is interesting to me. Why not? There is not a single iota of accountability here with these people,” McGregor tweeted.

It appears that this isn’t a typical McGregor hoopla as the UFC superstar is turning 35 on July 14th 2023 and in Ireland, a presidential candidate must be 35 years or older and receive nominations from local and country authorities.

“A 4 year term, or potentially 8 if revoted. I could easily commit fully to this sometime in the future. When eligible. Who knows, but know this. Who else?,” McGregor added.

When one Twitter user, who appears to be a critic of the Irish government, stressed that, “The role of president is mostly ceremonial. The president signs bills into law. He/She cannot ask the government for accountability, is apolitical and can only refer bills to the Supreme Court on advice they may be unconstitutional,” McGregor grabbed the opportunity to make an early promise to his compatriots in a short response.

“I’d fancy my chances of correcting that,” McGregor replied. 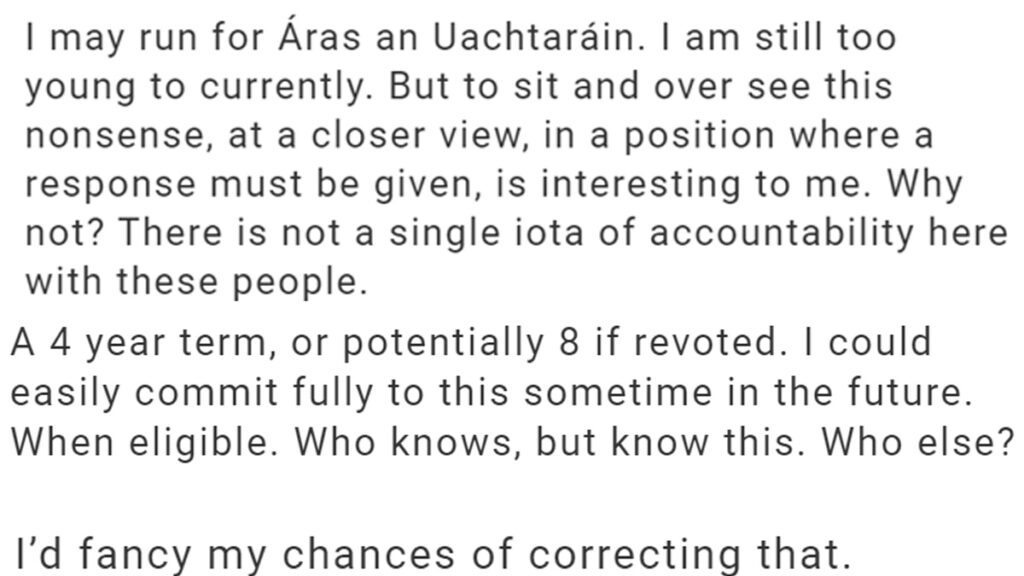 Amid the pandemic in 2020, it can be recalled that McGregor boldly tapped his fellow countrymen and the Irish government and called for a full lockdown to prevent further casualties.

Back in the UFC, McGregor has been removed in the official lightweight rankings following his withdrawal from the USADA pool. The 34-year-old has been inactive since July 2021. He last fought Dustin Poirier in a trilogy match at UFC 264 where he suffered a gruesome leg injury. McGregor hasn’t won a fight since January 2020 when he TKO’d Donald Cerrone at UFC 246.

Do you believe Conor McGregor would be successful in the realm of politics?