The Irishman didn't hesitate to gloat after things went his way in court.

Conor McGregor wasted no time in hitting out at Artem Lobov after his Proper 12 Whiskey lawsuit got denied. Recently, the legal battle between the pair of now-former friends took a turn when McGregor was able to block the case from getting the fast-track to Ireland’s Commercial Court. The Commercial Court in Ireland deals only with significant commercial cases.

Specifically, cases that deal with more than one million Euro in value of the claim being made. Those cases tend to be resolved much faster than the standard High Court. Judge Denis McDonald  determined that due to the “scarce resources” and “lapse of time” between the whiskey deal actually happening and the lawsuit, the Commercial Court could not pick up the case.

In a now-deleted Tweet, McGregor took aim at Lobov for the lawsuit, saying the following:

“Artem you little jonny head, unlicky the other day in court, proper twelve day, but what did you expect?” McGregor wrote. “I want them court fees the judge awarded me also. Need them pal. F—ing idiot.”

Following the hearing, Lobov’s lawyer released a statement, revealing their intentions to continue pursuing legal action through the next court.

“Mr Lobov notes the judge’s ruling and thanks him for his consideration of the application,” he said. “He is now looking forward to his case progressing in the High Court chancery list instead and hopes the proceedings can be determined as soon as possible.”

Documents filed during the case reveal that Lobov was seeking a 5% cut of the $600 million whiskey deal. Lobov claims he was the mastermind behind the whiskey venture, and claims to have three witnesses who saw McGregor shake his hand and say “Remember, 5 percent is yours, no matter what.”

However, McGregor’s legal team countered with messages from Lobov saying that he wouldn’t accept any money from the whiskey deal. McGregor shared these messages, on Twitter, along with some more scathing comments of his own.

One of the Lobov messages read as follows:

“Let me start by saying that I swear on my child’s life I will NOT take a cent out of the whiskey deal!!!” the message read. “That is something I enjoyed doing and the thought of knowing that I helped you with something keeps me warm on the coldest of nights.”

McGregor captioned that with a statement:

“Swearing on your child’s life is ludicrous, pal,” McGregor said in another since-deleted Tweet. “Actually revolting. ‘Keeps me warm on the coldest of nights,’ haha f—sake lad wtf happened to you man? Piss off and leave me alone how about that lad? F—ing turncoat p—.” 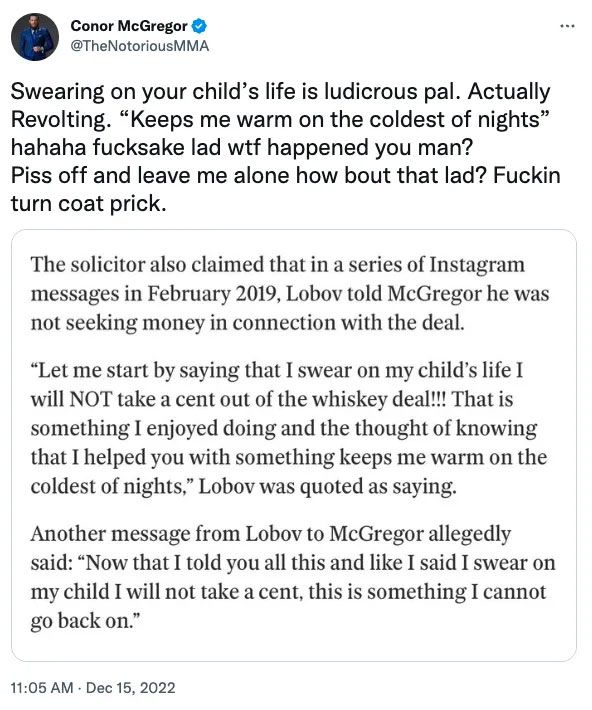 The Irishman also went on to suggest that Lobov would be left with the bill for all the court fees that the lawsuit is producing as well.

“I’m not paying these lawyers nothing,” Lobov said. “Little rartem is. The business genius with his college degree. F—ing jackass … It’s deeper than the dough for me. Put it on me box.”

It is important to mention that Lobov and McGregor’s friendship of 15 years has ended. We will keep you informed about the progress of this case, which is being heard in the Irish High Court, as it develops.