Just like in Encino Man when Pauly Shore ressurected his caveman friend from an icy prison, I guess the UFC had no idea what they were getting into when they signed a viking. You can’t bring in a real life warlord and then try to gussy him all up and change everything. It’s just not going to happen.

They already took his axe. Granted, it was probably an insurance nightmare. By all means then, take the real battle axe, but at least let him carry a plastic, but believable prop… Don’t just take away a viking’s best friend.

That was bad enough, but the Ontario Athletic Commission in Canada decided that they had to take a viking’s other best friend away: His beard. Why? Why?! There is clearly a conspiracy going on right before our very eyes. The UFC is scared of what a legitimate viking can do to their roster so they are doing all they can to strip him of his powers. 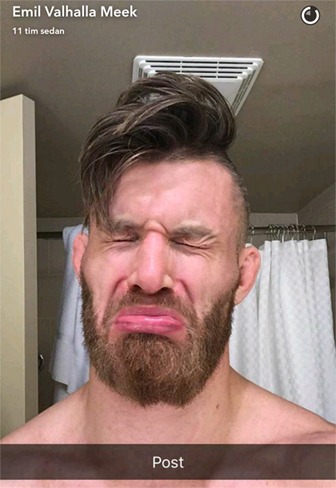 Jokes on them though. Emil Meek’s power does not come from just his beard or his battle axe, it comes from the might of Odin, elemental lighting, the oceans of Midgard and whatever power he absorbed from destroying Rousimar Palhares.

Video: Lando Vannata Sent Makdessi To the Lands of Wind and Ghosts in KOTY
Read Next Post →
Click here to cancel reply.