Breaking: Will Brooks Cut From Bellator.

Posted on Last updated: May 14, 2016 By: Author Justin Golightly

Well, this has been a long time coming for Bellator Lightweight champion Will Brooks. Even back at the end of last year after Brooks defeated Marcin Held, he said he was entertaining free agency when his contract was up. Little did we know a shit storm would follow that played out partly in front of us, but mostly behind the MMA curtain.

All I can say is don’t be surprised if you don’t see me fight for a long time. https://t.co/NweVhA34yS 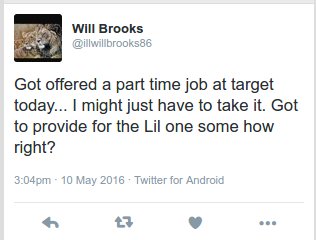 Being that I’m a magnet for trouble, my coaches and management have requested that I remove myself from twitter. pic.twitter.com/vKnkyvnNAU

After the months and months of tweets, statements and rumors, everything finally culminated today with the official release of Brooks from Bellator. Scott Coker provided this statement:

“It was very simple,” Coker reportedly told MMA Junkie. “Will Brooks’ contract is ending, and we made a decision not to renew it. We’re going to give him a full release, so we’re not going to be in the Will Brooks business any longer.” – via MMA Junkie

Where does one of the top Lightweights outside the UFC wind up next? Will an organization take the risk after the trouble? Will that organization be the UFC, whose Lightweight division is already the deepest class of the whole roster?

Who knows, but after the news broke, Brooks returned to twitter with a simple message…