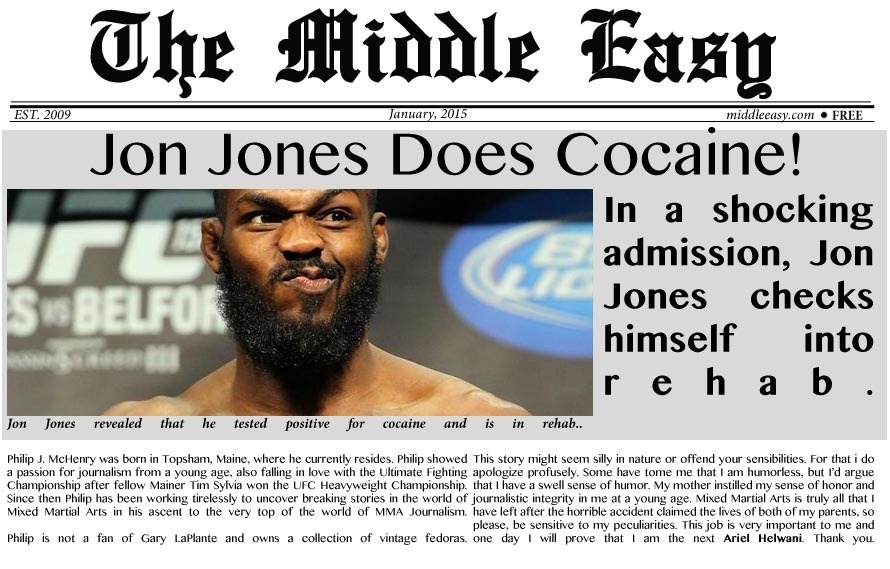 LAS VEGAS, Nevada, January 6th, 2015 — In a truly shocking turn of events it was revealed today that UFC Light Heavyweight Champion Jon “Bones” Jones is a user of the recreational drug cocaine. This shocking revelation that has shook the MMA world to its very foundations was thought unthinkable previously. Jones, known for his squeaky clean image and undying love for Jesus, devotion to his longtime girlfriend and children, has reportedly entered into rehabilitation.

It is unclear for just how long that Jon Jones has been using cocaine, but there are now reports swirling around that Jones might have a problem with the drug and has been using it for a very long time. This comes as a surprise to this reporter that a man like Jones, a man of the people, who has never done anything odd in public, would be a dirty drug user.

What is also unclear is what happens from here, considering that Jon Jones failed a drug test for his fight against Daniel Cormier at UFC 182 and is currently in rehab. The UFC has been unavailable for comment at the moment, but many are left wondering if the UFC strips the title from Jones or if they make an exception to the champion. The test was administered in early December but no action was taken against Jones.

More on this story as it develops here on MiddleEasy.com.

UPDATE 18:00EST: The UFC has made a public statement about Jon Jones.

“We support UFC light heavyweight champion Jon Jones’ decision to enter a drug treatment facility to address his recent issue. While we are disappointed in the failed test, we applaud him for making this decision to enter a drug treatment facility. Jon is a strong, courageous fighter inside the Octagon, and we expect him to fight this issue with the same poise and diligence. We commend him on his decision, and look forward to him emerging from this program a better man as a result.”

Dana White followed with a statement of his own.