Maybe no one in the history of MMA has ever pimped the system better than Ben Askren. After this weekend’s title defense, and seeing Ben Askren posing with a Lamborghini that he was gifted after trashing some poor fool, I can’t help but remember a time when Askren’s spot in the sport wasn’t so secure. It was only 2013 when Bellator allowed their inaugural welterweight champion to leave the promotion, and his anticipated signing with the UFC wasn’t going so smoothly. Dana White famously wasn’t interested in signing Askren, going as far as to suggest he sign with World Series of Fighting to get some experience.

Really Ben was caught in an interesting time for Bellator and UFC. Dana White had more interest in discrediting Bellator champions than he was in seeing them compete and possibly beat the “best welterweights in the world”. Also, Askren’s style did no favors for him. Even the Bellator faithful had to brace themselves for an Askren fight.

All these years later and the signatures of an Askren fight hasn’t changed all that much. They were synonymous with lopsided unanimous decision victories… and damn were they boring. A steady stream of take downs and top position, smothering ground and pound from the guard. Never pressing a finish, but always in complete control. Askren’s approach to fighting is polarizing as fuck.

But Askren’s ability to win is never in question. Losing seemed anemic to him. But would his victories ever be shocking, thrilling, even entertaining? No. You got what you expected every time. Ben just quicksanding his opponent, dragging him into worse and worse positions until they give up or run out of time. Back in 2013, it was determined that a fighter like Askren didn’t have enough value to the UFC. Not only could he defeat their marketed stars, but he would do it while frustrating or boring fans, all along not cow tailing to the UFC brass. As negotiations failed, it seemed that Ben had effectively been black balled from top tier fighting.

So how did we get here?

Fast forward to 2017 and “Funky” is the Belle of the Asian MMA Ball. One Championship is fighting to become the largest MMA promotion in the eastern hemisphere, and they are using Ben Askren in main events every year. And according to Askren, the paychecks are substantial. His last opponent was the 128th ranked welterweight in the world, and dude got a Lambo for ending him. He’s had harder training sessions at Roufusport. How in the world, did Ben Askren become a star in Southeast Asia to the point where he is crushing cans for Lamborghinis? I can only imagine that he is a kind of massive villain representing the evils of American excess. Perhaps, his Chia Pet-like hair is irresistible in other cultures. Just exotic enough to be desirable. I’m sure that I will never quite understand Ben’s cross cultural appeal.

More baffling than his popularity is how much he is being paid to do this. I mean, Robbie Lawler and Rory Macdonald nearly murdered each other and probably got paid less than $150K each. Shit Tarec Saffedeine is fighting Rafael Dos Anjos and probably won’t clear $50,000. And here’s Ben Askren making well over half a million dollars over the last three years for basically putting on wrestling clinics across Asia. That’s how you make the game work for you. If you can’t fight the best in the world because the boss of that company is a d**k, hell, why not get paid the best in the world to fight whoever.

All the while, Askren has remained one of the most consistent sources of real talk against the rampant stupidity in MMA. He also manages to deliver priceless moments, like hitting CM Punk with a Stone Cold Stunner.

And somehow after all this time, the public sentiment has swayed back Askren’s way. He has become must-watch for the hardcore fan, even if it is just sought out in GIFs and replays. Everyone wants to know what happened, even though we know what the outcome will be. And now we are tunign in for moments like these.

Ask and ye shall receive pic.twitter.com/GieCmXuXZ6

The genuine ability to not give a fuck exhibited by this American wrestler while steam-rolling fighters half a world away from his home is just so fantastically, undeniably MMA to me. It’s the sports greatest success story. If Askren chooses to retire after his One contract is over, he may have completed the greatest MMA career possible.

Easily collecting multiple six figure pay days to fight competition far below his skill level, while being beloved for talking shit to Dana White… Retiring as undefeated champion, in both One Championship and Bellator MMA… Two titles belts and two middle fingers to the entire industry that looked to chew him up and spit him out penniless… I say, well played good sir, well played. 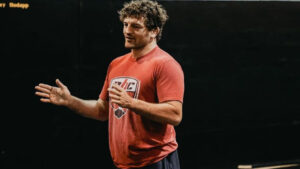 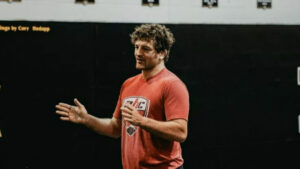 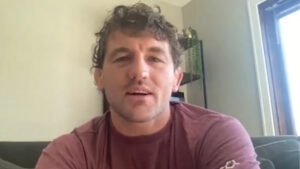 Ben Askren Shares Thoughts on Jake Paul and the Debate Over UFC Fighter Pay; ‘It’s Kind of a Disaster’ 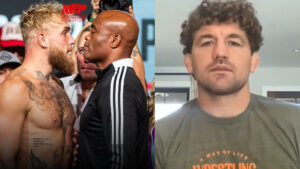 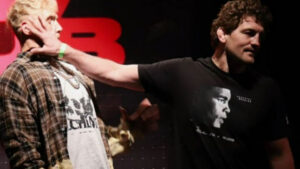