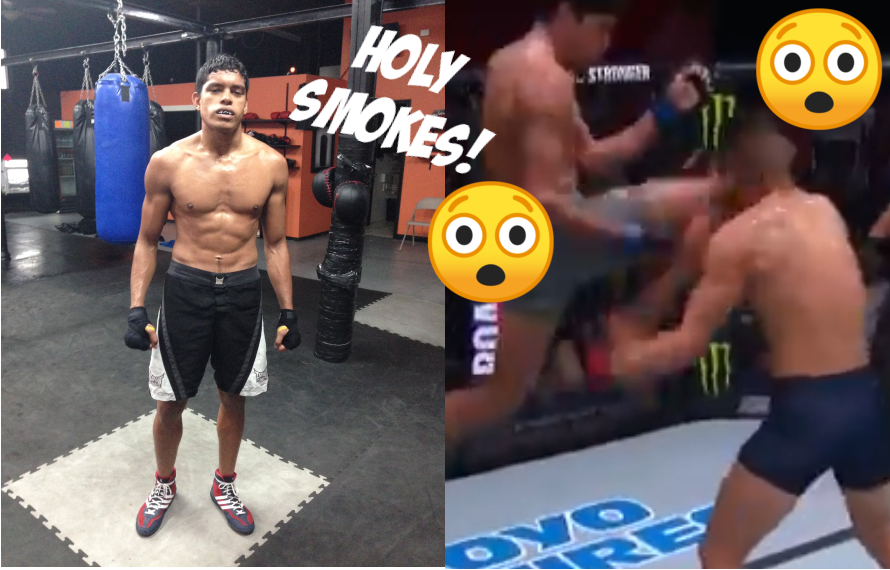 It was made clear in recent weeks, that Dana White does not want to see you wrestle at the end of a fight on the Contender Series. Lucky for Aalon Cruz, that was not a problem.

Cruz was looking to put his 5-2 record on the line, to win a UFC contract against Steven Nguyen. Nguyen was undefeated heading into the bout. However, he did not leave the cage that way.

With just 24 seconds left in the third and final round, Cruz blasted Nguyen with a massive flying knee. Subsequently, this knee flatlined Nguyen, ending the fight, and earning Cruz a UFC contract on the spot. Check out the video of this crazy moment!

Immediately after the victory, Cruz faced Dana White, who was sitting cageside. White signaled immediately that Cruz earned a contract. Additionally, he lived up to his word, as you can see when the contract winners are announced, here:

Now, this may not have been the craziest flying knee that we have seen this month. That honor clearly goes to Jorge Masvidal. However, this is still an awesome highlight from Cruz. Additionally, this one of the best finishes in Contender Series history.

Aalon Cruz will be a great new addition to the UFC’s featherweight division. Although his career is fresh, this marks the third win in a row for the Florida native. Of all 8 of his professional fights, only two have seen the scorecards. This marks an exciting new face to the even more exciting division.

Watch: Jorge Masvidal with just the chilliest call out of Conor McGregor yet
Read Next Post →
Click here to cancel reply.