Even hardcore Floyd Mayweather fans are catching “McGregor Fever”. The only way to cure McGregor Fever is to talk endless shit to all your rivals then actually back it up when shit gets real. From the official Facebook page of Floyd “Money” Mayweather we have the latest Mystic Mac sighting.

But wait that isn’t Conor McGregor’s Facebook posting on Mayweather’s FB page? This is clearly an imposter and not the real Money Mac. If McGregor were to call out Mayweather it would be via ESPN interview, impromptu driveway press conference (while Conor does sit-ups), or on Instagram. Oh just wait until those Mayweather fans attack this fake Conor McGregor and flame him with angry, negative comments.

Is that 175,000 likes of the fake McGregor’s comment on Mayweather’s own Facebook page? Even Mayweather fans, who go out of their way to like the boxer on Facebook, kind of hate him a little bit. Look at Fake McGregor over there swaying the vote towards MMA’s new pay per view king. 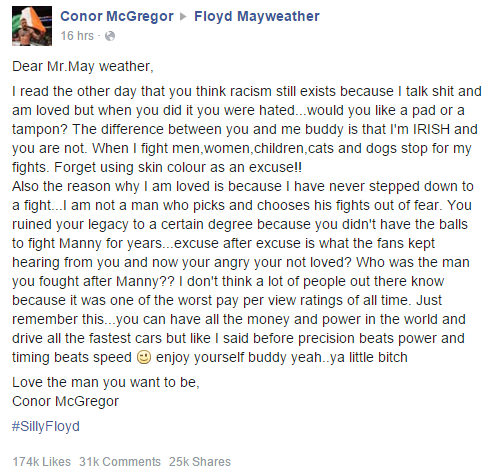