Tereshin has shown no signs of stopping down anytime soon

Kirill Tereshin or the ‘Russian Popeye’ has got even more Synthol injections.

The social media celebrity Kirill Tereshin, who was called up for military service, was concerned about losing weight upon joining. Having trained in the gym for two years prior to his admission, Tereshin took drastic measures to make sure he holds on to the hard-earned muscle mass. That was the first time he tried Synthol.

Once his service was over, Synthol stayed and the ‘Russian Popeye’ was born.

Soon after dabbling with the substance, the ‘Russian Popeye’ began to inject his arms with petroleum jelly, almost obsessively. The doctors warned him of the damage his little habit was causing and urged him to go under the knife.

Like the pink filler stuff McDonald’s gained notoriety for passing off as real meat, Tereshin was forced to take the junk out of his body. He was scheduled to have more similar surgeries but had to delay them due to the pandemic.

An appointment that he did make time for was to get ‘alien’ face injections. The latest modification to his semi-natural physique comes in the form of deference to “the most powerful race in the entire world.”

Taking to his Instagram to show the next stage of human evolution on Tereshin’s chart as opposed to the one Charles Darwin came up with, he shared the results with his fans. (translated by MMA Mania)

“I‘m an ideally handsome male. All stands out clearly: lips, chin, cheekbones, forehead, nose is even, lower jaw. I want to make an alien face. I have believed in aliens since I saw UFOs as a teenager.

“I know that they exist and that they are the most powerful race in the entire world. I feel like I‘m going to them.”

Perhaps, Tereshin going to them would be a good idea or a terrible one if the aliens are vengeful.

The alien wannabe competed in one mixed martial arts fight against a man who was two decades older than him. He may have his name but he sure didn’t have the power as the ‘Russian Popeye’ got a human-style ass-whooping inside the cage.

It may have been the weight of his arms that kept telegraphing every move or a belief that his species would come and protect him. Joe Rogan and Mike Tyson may lend an open ear to the man’s claims, as they believe that “there’s definitely some sh*t visiting us.”

As for the ‘Russian Popeye,’ it’s time to take care of his rotting muscles and take the Synthol out. Unless he’s banking on the aliens giving him a super serum, he will likely die without the right changes. 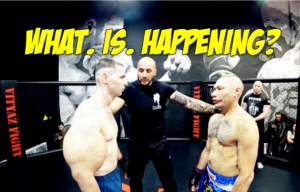 Video: Insta celebrity with arm implants fights blogger, gets tapped out in the most embarrassing way