Paul -- who holds a 0-1 professional record -- is set to box Mayweather in an exhibition match set to take place on February 20.

The popular YouTuber — who holds a 0-1 professional record — will meet Mayweather in an exhibition boxing match set to take place February 20.

Ortiz — who notably suffered a knockout defeat to Mayweather back in September 2011 — is a close friend of Paul’s and has been helping him in his preparation. And he could do nothing but heap praise as he allegedly watched him knock out three sparring partners.

“Holy crap,” Ortiz told MMA Fighting. “… Mind you, these are full-on professional boxers. I sat back in shock and awe. He was so composed and relaxed. He used his reach perfect – took a little step, hook down the middle, sleep. Night-night.

“My only complaint there is that he didn’t read him a bedtime story.”

Of course, training camp stories should always be taken with a pinch of salt. But it doesn’t hurt Paul that a former welterweight champion in Ortiz is singing his praises.

So much so that he even thinks Paul will give Mayweather trouble.

“I know what I know, and I know what I see,” Ortiz said. “What I’m saying, in a sense, is that he will give Floyd trouble.”

“… He’s a dear friend, and I believe in him. I’m telling you, it’s going to be an interesting fight. I’ve talked to him about Floyd a few times. … I give him the simple things: ‘Floyd is Floyd, but you’re unstoppable. You’re on another level.’ I strongly believe Floyd will have trouble. Logan can box, and he has power, reach speed, and he can move now.”

Paul A Bigger Threat Than McGregor

One would imagine Paul wouldn’t trouble Mayweather more than Conor McGregor who ended up suffering a 10th-round TKO defeat when he clashed with “Money” in August 2017.

However, Ortiz believes that will be the case.

“Conor couldn’t do nothing,” Ortiz explained. “I don’t mean to speak bad. Conor’s a heck of a UFC fighter in the octagon, but he has no business in a ring, as opposed to someone like Logan – Logan learned in a ring. So his stuff is all standup. Everything about Logan is boxing, angles, moving, so it’s two different worlds. I couldn’t tell you what someone like Logan or myself could do in an octagon, but stick to what you know. And Logan, he knows boxing right now.

“… McGregor’s a hell of a boxer. I’m a huge fan of McGregor. I’ve always pulled for Conor, except for when he fought Floyd. Floyd shut it down when Floyd was done playing. He said, ‘OK, I just gave the world a show. I’m going to put you night night.’ Did he catch him a couple of times? Absolutely. It’s a fight, for god’s sake. But Floyd was going to shut it down when Floyd wanted to.”

While all that is debatable, Paul certainly has much superior size and reach on Mayweather than McGregor did. Whether he has the accuracy will be known in just over two months.

“[Mayweather] found a YouTuber – that sounds easy enough for a 20-time world champion,” Ortiz said. “Alright, let’s beat him up. But what I’ve been watching and seeing is a YouTuber gone professional boxer who puts in hours and hours of work studying films. He’s very disciplined, and he’s working his butt off, and he listens. He has a heck of a coach [in Milton Lacroix] who’s very knowledgeable and very experienced. I believe it’s a dangerous combo.”

“From what I see at the gym, I can honestly say Logan can probably hit harder than [Mayweather]. Now, who’s more accurate? We’ll see Feb. 20.”

Then again, it could just simply be a case of the arguably the greatest defensive boxer of all time schooling a YouTuber-turned-boxer. 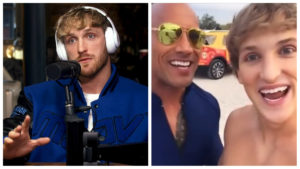