Andy Ruiz Jr. On His Upset Win Over Anthony Joshua: “This Fight Is For All My Fat Boys”

Mexican-American took this match on short notice and entered into this contest as a massive 11-to-1 underdog. Ruiz Jr. didn’t easily cruise to victory as Joshua dropped Mexican boxer in the third round with a massive left hook. Ruiz got back up and turned the tables by flooring the Joshua with furious punching flurries and continue to wobble British fighter on many occasions. Then by the seventh Ruiz throwing heat at Joshua and knocked the British champ down in the opening minute. Moments later during an exchange Ruiz knockdown, Anthony Joshua, again. Joshua on his knee and stumbled back on the corner. The referee Michael Griffin asked Joshua if he wants to continue the match; however, latter never stepped forward, and the fight ended as TKO.

A doughy Mexican-American fighter Andy Ruiz took to social media and dedicated his win to all the fellow underdogs and boxers who carry extra weight on them. 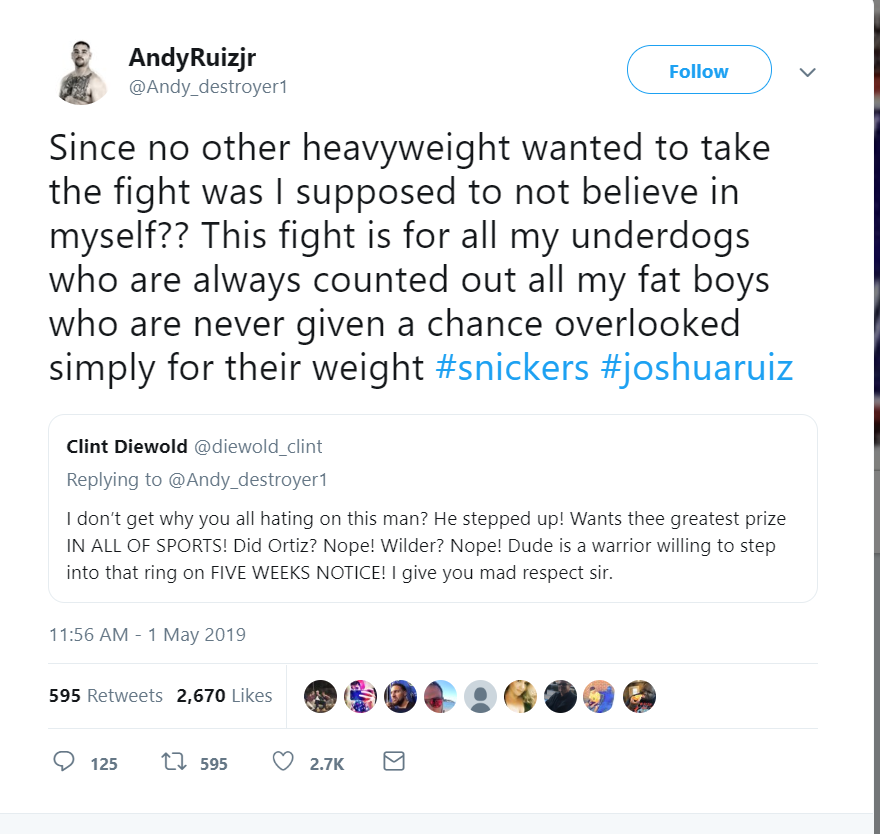 Ruiz has a strong penchant for eating Snickers bar before his fights. And his hashtag #snickers got a real response from the official Twitter account chocolate bar company Snickers. We can assume a future sponsorship deal is imminent.

After a big win, Ruiz changed his background Twitter photo to snickers.

With a stunning victory over Anthony Joshua, Ruiz Jr. improved his overall score to 33-1. His only loss came against a New Zealand’s Joseph Parker.

Who’s next for Ruiz is unknown however a rematch with British fighter is certainly an option.

John Kavanagh: If Drake Shows Up At My Gym 'He's Getting Roundhoused'
← Read Last Post