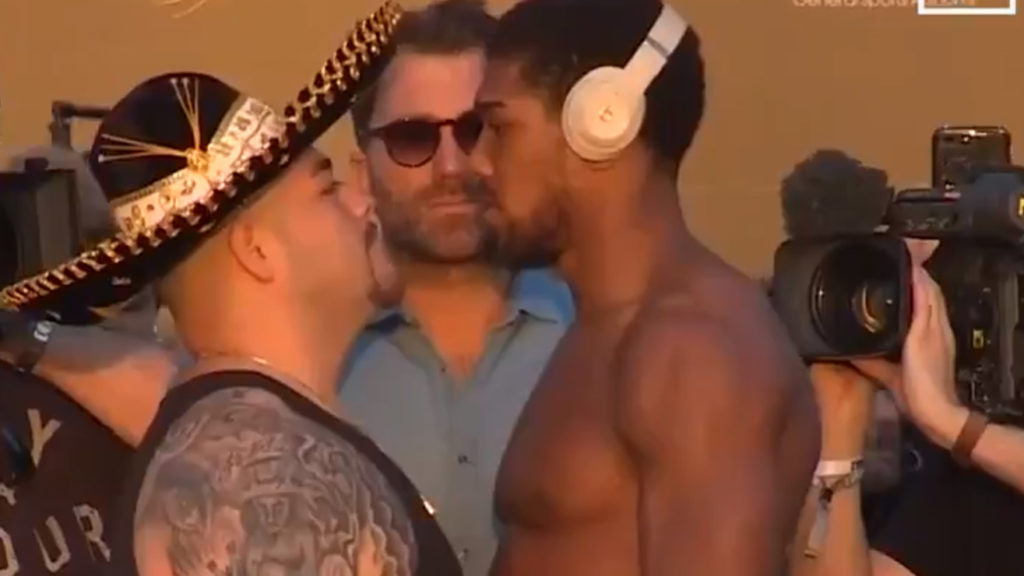 It’s going to be an epic rematch!

Current WBA, IBF, WBO and IBO heavyweight champion Andy Ruiz absolutely shocked the world of boxing when he defeated former champ Anthony Joshua via TKO in the seventh round of their match back in June.

As a result, Ruiz’s popularity skyrocketed and he became the first heavyweight boxing champion of Mexican heritage. Although, he’s originally from California.

But plans for a rematch were to be expected shortly after and we’re just a few hours from seeing the two elites Andy Ruiz Jr. (33-1, 22 KO) and Englishman Anthony Joshua (22-1, 21 KO) face off once again. The event will take place on Sat., Dec. 7, 2019, which will be live on DAZN from the Diriyah Arena in Diriyah, Saudi Arabia.

But as always, before the fight comes the weigh-in and traditional staredown. Well, Ruiz at 283 pounds was clearly the heavier of the two weighing 46 pounds more than Joshua who was 237 pounds. Although, Joshua is the much taller fighter at 6’6 which gives him a notable advantage in this department, over the 6’0 Ruiz.

But their first matchup didn’t seem to matter when it came to physical comparison as Ruiz was still able to close the distance on Joshua after the latter’s performance began to decline. Then the eventual champion (Ruiz) was able to capitalize where he surprised everyone with his power and stamina.

The highly anticipated rematch is going to be an event of epic proportions and we’re sure fans are expecting an amazing boxing match.