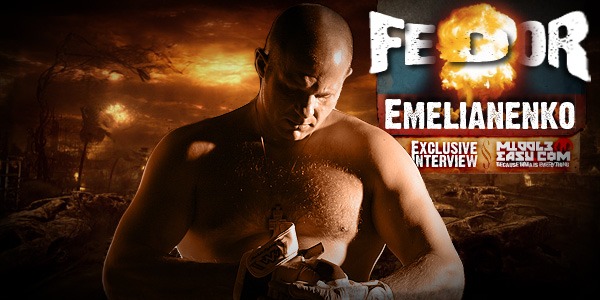 One day your children will read about a thirty-foot tall giant that lived in the hills of Russia. They will learn that his garments were made from the fear and tears of his opponents and his bones were constructed of adamantium. When this giant would throw an overhand right, planets would recoil in terror and the entire field of astrophysics would take note on its precise trajectory. Time and space would stand in awe at the various ways in which this man broke the limitations they’ve placed on the universe. And when geneticists tested the DNA structure of this individual, they found remnants of awesome spread throughout his genetic code. Your children will read about a man that entered the sport of mixed martial arts and perfected it. This man is Fedor Emelianenko and he’s the baddest man on the planet. Before his anticipated Strikeforce/M-1 Global bout with undefeated Brett Rogers, dude took the time out from his daily regimen of training with Loch Ness Monsters and Abominable Snowmen to do an interview with MiddleEasy. Big thanks to Strikeforce’s Mike Afromowitz, M-1 Global’s Jerry Millen and translator Jacob Schaap for making this possible.

How did you celebrate your 33rd birthday?Well, nothing special. We just got together with my friends and family members. We were chatting, having a good time, drinking nothing more than tea.
If we wanted to party in Stary Oskol on a Friday night, where should we go?I really…don’t know.
How are you preparing to be on prime-time American television?You know, I have been performing at big stages on multiple occasions. I don’t feel any added pressure. I train as I always train and we’ll see how the fight goes.
Brett Rogers said his strategy of defeating you is to fake an injury…Well, let’s see…Then I need to be cautious (laughs)
What would you say to the people who criticize you for never fighting in a cage?I have nothing to say to those people.
You’re headlining EA Sports MMA, are you an avid gamer?No, I don’t play video games but it’s very interesting to compare myself to my digital copy, to see how it’s realized. I know Electronic Arts is the leader of the market when it comes to computer sports games. So I’m sure the result will be great.
Mental focus vs. physical prowess. What wins? It’s hard to say. The outcome depends on different factors, on the situation and circumstances.
Which female MMA fighter do you enjoy watching?No one in particular.
When Kevin Randleman slammed you on your head…what were you thinking?I wasn’t thinking, I was just concentrated on the fight and acted accordingly.
Who has been your one absolute toughest opponent thus far in your career?Not sure, there were so many great fighters like Mirko Cro Cop, Arlovski, Nogueira and Randleman.
Shane Carwin vs. Brock Lesnar is going down at UFC 106, who do you have?It’s an intriguing bout. Two big heavyweights. I believe the one with the wiser strategy will come out the winner that night.
‘The 5th Execution‘, how was it to star in your first action film?(laughs) Well, the news spread too fast. That was an interesting experience, pretty new, but I think acting is not my thing. I wouldn’t like to repeat that in the future, especially if it endangers my training regimen.
When can we expect you to travel to the future and join your fellow Terminators?(Huge laugh)
If you couldn’t make a deal with Strikeforce, what would you have done?I don’t know, but I didn’t make a deal with Strikeforce, M-1 did.
Lets say you’ve cleared out the HW division. Would you consider LHW?Dropping down to light heavyweight? I have never considered that. I don’t see it as an option. Why would I at all?
Was avenging your only “defeat” the most satisfying point of your career?Not at all. I had not been looking to avenge that fight. We had been training in the Netherlands at that time, concentrating on muay-thai. Then the Pride representatives came along and offered me this bout. I have never refused to fight anybody. As I can recall, it was about one month before the date of the event.
What’s on your ipod right now? What song gets you amped up for training?Usually we don’t listen to music when training. Most of the time there is no specific music.
Do you think you’ll ever appear in the Russian version of Dancing with the Stars?No, I don’t think, I don’t see myself doing this kind of things in the future. This is not in me.
How do you want history to remember you 100 years from now?As a good and honest ambassador of Russia and MMA in general.
Is there anyone you would like to thank? Shout-outs?I’d like to use this opportunity and thank all the people who always support me, people who respect me and my interests. Thank you very much. I’m training hard to give you a good fight at the Strikeforce and M-1 event on November 7th.
For more MMA News, Rumors and Updates follow the Red Monster on Facebook, Twitter, YouTube and Instagram
FacebookTwitterFlipboardRedditWhatsAppPinterestLinkedIn
Check out the Dynamite!! 2009 trailer because Japan makes everything look cool
← Read Last Post

We just interviewed Fedor Emelianenko and he told us...
Read Next Post →
Click here to cancel reply.