A Lesson in Street MMA: Start a brawl at the Kentucky Derby, soccer kick KO that guy in the polo

by Tommy Messano
in Street Fights

The most bro-dog thing you could ever do is get into a fight on the infield of the Kentucky Derby while wearing a bow tie. Who knows the origins of this impromptu act of Kentucky Derby MMA but the guy in a bow tie and suit jacket two-piece combo went from a 5 on 1 assault to walk off knockout champion in one strike.

Somehow the bro outnumbered was able to circle out of his bad Derby spot and pull ahead into the lead all thanks to a perfectly timed soccer kick. There is no better way to end a Kentucky Derby party then to soccer kick someone to sleep; it really sets the tone. Lace up your penny loafers and pour some mint julep into your beer bong as you watch this some Pride soccer kicks go down in Kentucky.

A third view of the Kentucky Oaks infield fight. pic.twitter.com/GrGLm9794K

Maybe the best view of the bro-down

Another view from the Kentucky Oaks infield fight. pic.twitter.com/eYPn67aQ4B 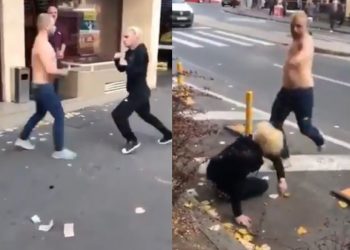 Street MMA: Further Proof That The Soccer Kick Is The Best Finishing Move In Fighting

A Lesson in Street MMA: Dude eats a soccer kick then cuts a promo from an ambulance

Video: Fighter gets DQ’d after he KO’s his opponent with a beautiful, blatant soccer kick

A Lesson in Street MMA: Our hero pulls off a Jet Li style flip kick, soccer kick in a real fight