Wyoming Legalizes Bare Knuckle Boxing, Signaling the Beginning of the End for an Unjust Prohibition

May the Gods of Combat be praised! Through their intervention, a grave injustice has begun to be lifted from the land.

In their great wisdom, they have lifted the gross prejudice against bare knuckle boxing in the United States of America…well at least in Wyoming.

Yes, Wyoming has legalized Bare Knuckle Boxing. For what greater purpose or for what promotions remains to be seen. But all we know, some enterprising Wyomingite (read: shit-eating wildman) will have the street of Cheyenne on fire with anticipation for some bare knuckled throwdown. I only pray one day that I can witness in person boxing the way the Gods of Combat intended for it to be.

For all of you enjoying today’s fisticuffs – a reminder Wyoming just became the first State to legalize pro Bare Knuckle Boxing https://t.co/DMzc1DWQ4l

Erik’s exceptional blog Combat Sports Law really is the best thing happening in all of Canadian MMA since GSP returned from his hiatus.

I can only hope this spirit of freedom continues to roll across these United States of America. One fine day, we can see Bare Knuckled Boxing in the hallowed halls of Madison Square Garden and The Coliseum. Boxing will once again return to it’s former glory, if the Combat Gods will it. 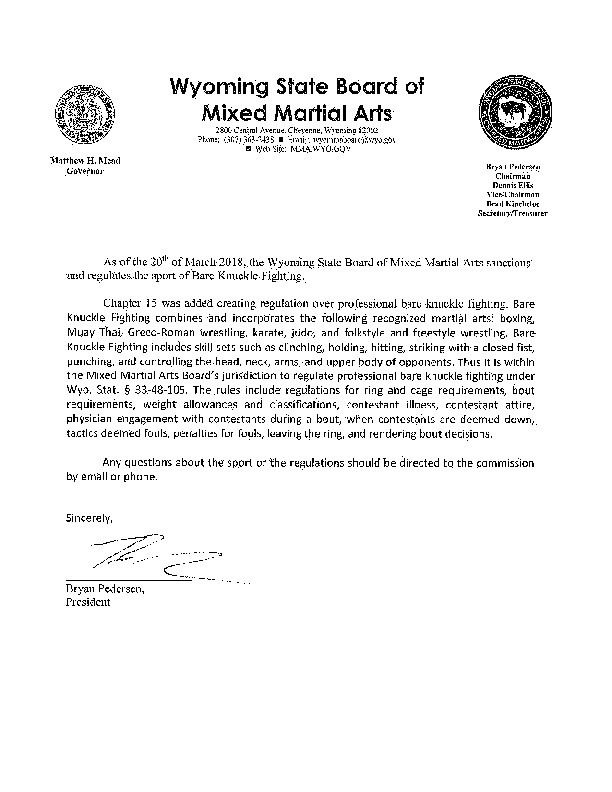 Video: Alexander Povetkin Knocks Out David Price with a Left Hook of Death, Must See Knock Out
Read Next Post →
Click here to cancel reply.