For those international readers of MiddleEasy.com (or people who have never heard a single mid-90s hip-hop track), putting a person ‘on blast’ is essentially providing a piece of information that is used to refute the argument or belief of another person. For example, if Arnold Schwarzenegger denied having an affair with his house keeper, Maria Shriver could just show a picture of Arnold’s ‘love child’ and say something along the lines of ‘Well how the [expletive] does this little kid look like Conan the Barbarian?’ That would be the absolute definition of putting someone on blast. Just a few minutes ago, Marloes Coenen utilized a similar ‘blast’ technique by publishing her entire check from Forza, LLC, the company that now owns Strikeforce which, of course, is all owned by ZUFFA. Now the significance of the check lies in the fact that it’s made out to ‘Marloes Coenen’ and not any other entity. You’re still scratching your head trying to figure this out? Don’t worry, we have an explanation — but you should probably shampoo more often. The reason why this is significant is due to a recent interview on MMAFighting in which Dana White says the reason for the cut of Marloes Coenen (and most of Golden Glory) was due to business practices. Specifically, the need to pay Golden Glory instead of the fighters. Here’s an excerpt from today’s Mike Chiappetta interview with Dana White.

As you can see in this check, it’s made directly to Marloes Coenen. See for yourself. 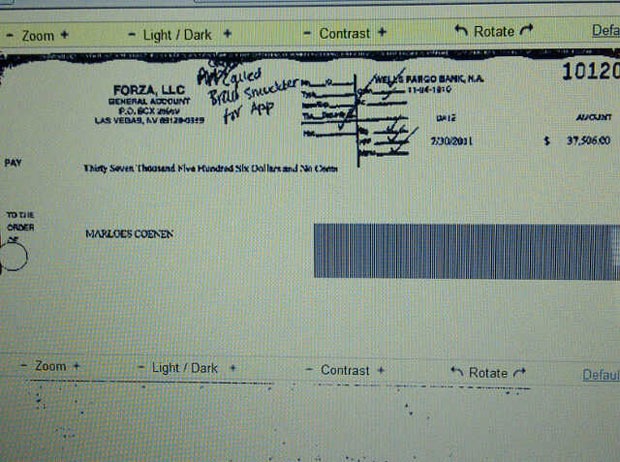 Could there be more to this story aside from this scanned copy of the check? Of course there is — we just don’t know it yet. However, in the meantime I’m getting some Mexican food. Hey, I’m hungry…I can’t help it. Get off my back.

Update: I’ve been thinking about this, and to play devil’s advocate, Golden Glory may have requested their fighters to be paid through the organization, ZUFFA denied it and dropped the fighters because of it. However, judging from the way Marloes Coenen is presenting the information, the impression I initially got was the check was used to dispute the statement made by Dana White.

If you missed Tim Kennedy on Deadliest Warrior don't fret, we have the entire episode right here
← Read Last Post