WFA will be featured as an organization in UFC Undisputed 2010 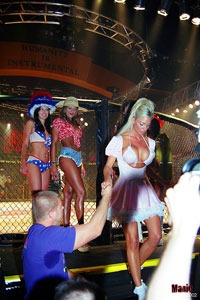 Some of you may remember how Club Rubber completely dominated Las Vegas around 2001-2003 with their cleverly titled ‘Pimps n Ho’ parties. I know I remember it because my friend, let’s just call him ‘Crackhead Brian’, tried to drag me along to that orgasm of spiked hair, vampire eye contacts, guys with Cadillac tattoos and glow-sticks. If you didn’t come up for breath every once in a while you would drown in testosterone. Created by John Huntington of Club Rubber, the World Fighting Alliance operated by their slogan ‘Where the fight club meets the night club’. DJ Beej spun after every fight along with Las Vegas strippers (temporarily turned go-go dancers) hopping in the cage and doing what they do best (take my last $20). Actually, the WFA was probably 80% scantily clad chicks and 20% MMA. They literally had chicks dancing everywhere, on the ceiling, in the cage, by the cage posing in the audience, backstage, coming off the steps, in bathrooms, on ladders. A couple of events even featured girls dangling from the ceiling in cages and to top it all off…Ice-T even performed during a fight. It was more like ‘Where the fight club meets the $30.00 cover Las Vegas Strip Club’ (they even press released their own after-fight parties).

The first sanctioned fight was November 2001 held at the Hard Rock Hotel and Casino which featured an impressive line-up including Frank Trigg, Antonio McKee, Rich Franklin, Marvin Eastman and Shaolin Riberio (even had Bruce Buffer announcing). The rules were pretty much the same as every MMA organization at the time but, you know…the whole ‘hot chicks everywhere thing’.

Now it looks like the days of the snaked skinned championship belt are back. Props to Fightlinker for being a bigger videogame geek than all of MiddleEasy combined (dude bought the new Aliens vs. Predator, who does that?). They found this interview of UFC Undisputed 2010 project manager, Neven Dravinski, talking about the implentation of the World Fighting Alliance in the game.

Woods: It seems like everything has definitely been streamlined and improved but at the same time, I want to talk about something else that stuck out during the presentation, which is the WFA [World Fighting Alliance] is the minor league promotion. I know Dana White has a strong influence on the game; did he walk in one day and say, “Hey the minor league is going to be the WFA. Those guys were jerks back in the day!”?

Dravinski: No, not at all. The way we looked at it is, we didn’t want you coming in with your Create-a-Fighter in Career Mode, jumping right into the UFC. We thought that there needed to be this aspect of earning your way into it. Last year we kind of just had you fight one amateur fight and then you’re obviously, all of sudden in the UFC. So we utilized the WFA –it’s an organization that the UFC actually owns right now– so we utilized them to kind of create a minor league system that you fight in the WFA and then once you’ve kind of proven yourself, then you work your way up and fight in the big leagues with the UFC. And the cool thing is that you can kicked out of the UFC if you’re not performing–you get kicked back down to the WFA and have to work your way back up. It is just another gameplay aspect that we added in there to kind of shake things up a little bit, give you more options, more variety and keep the UFC as what it is: the top-tier area for athletes in MMA.

Let’s hope THQ decides to keeps the go-go dancers in the game. Wait one second, I just got a note from my feminine side. It reads ‘Zeus, you male chauvinist pig’. [Source]