We finally have evidence of the first time traveling MMA fighter

Besides creating MiddleEasy.com, I’m also the author of the biggest message board thread on the subject of ‘time travel’ in internet history. That previous sentence is also my go to pick-up line.

A few years ago a guy named ‘John Titor’ claimed that he was a time traveler from the year 2036. Titor stated that in 2005, there was an American Civil War that stemmed from the presidential election which forced the country to split into five sections that were all ruled by various military infantries. He then said that in 2015, Russia launched an attack on America which essentially wiped out all major cities. According to Titor, after the devastation Omaha, Nebraska was named as the new capital of the United States of America. As far as John Titor going back in time, he states that he was commissioned to travel in order to obtain an IBM 5100 because it had the ability to operate system main frames — relatively old computers needed to fully restart society.

When asked to provide proof that he was indeed a time traveler, Titor published this picture of a laser bending out of his machine as he was time traveling. According to scientists, the light had a distortion that would be congruent to bending time and space, although I’m not entirely sure how they came to that conclusion. Titor even released a blueprint of his General Electric Army Model C204 Gravity Distortion Time Displacement Unit that seemed somewhat believable.

I created that back in the ‘supremely paranoid’ stage of my life that we all go through. You know, when you think that you’ve uncovered answers that have been hidden from the universe. Now years later, I don’t care if the Illuminati is running the world through the puppetry of politicians and highly successful entertainers. Just send me one of those cool All-Seeing Eye necklaces and we’re good.

Check out this screen cap from AXS.tv which shows Guilherme Trindade knocking out a guy named Jean dos Santos (Junior dos Santos’ son?) on March 17th 2023. Hopefully Trindade can hop back in the time machine and reverse that moment when James Krause knocked him out in thirty-one seconds earlier this month. 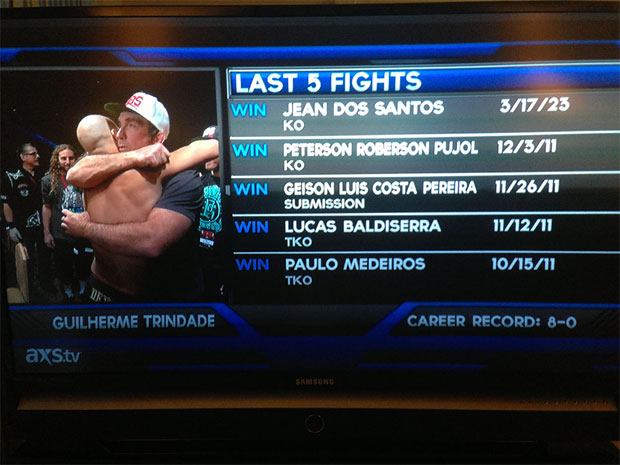